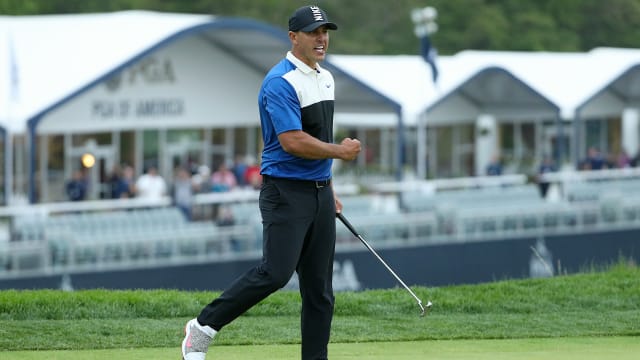 He did things the hard way on Sunday, but Brooks Koepka's wire-to-wire victory at the US PGA Championship continued a dominant trend over the past two years.

Four of the past nine major tournaments have now been won by the big-hitting American, who even missed one of those due to injury.

Koepka made a mockery of Bethpage Black's reputation as one of the most daunting courses in golf for three days, giving him enough breathing space to prevail despite a back-nine collapse on Sunday in Long Island.

A closing 74 was enough for Koepka to beat Dustin Johnson by two strokes and become the first man to retain both the PGA Championship and the U.S. Open.

In light of his latest victory in one of golf's four biggest strokeplay tournaments, Omnisport looks at Koepka's major performances dating back to his success at the 2017 U.S. Open.

Koepka already had four top-10s to his name by the time he made a major breakthrough in sensational style at Erin Hills. Koepka equalled the U.S. Open's lowest winning score of 16 under set by Rory McIlroy in 2011.

“That’s a long phone call for us."

The two-minute call Brooks Koepka had with DJ before winning the U.S. Open.https://t.co/9cEgKNBvL3pic.twitter.com/9gDnQQng8J

Just a month later and Koepka again showed his impressive major pedigree, tying for sixth at Birkdale. This time, though, the focus was all on Jordan Spieth and Matt Kuchar's final-day battle for the ages, which the former won to secure his third major.

Koepka again threatened to be in contention at Quail Hollow, where he trailed joint-leaders Kevin Kisner and Thorbjorn Olesen by one stroke after round one. However, a prolonged challenge never truly materialised and he tailed away to finish 13th as Justin Thomas became a major champion.

Unfortunately for Koepka, injury reared its ugly head for the first major of 2018 and a wrist problem saw him miss out at Augusta.

A three-month lay-off likely fuelled a frustrated Koepka's desire at the treacherous Shinnecock Hills. Few could have predicted him retaining his title, but a score of one over was enough to deny Tommy Fleetwood, whose seven-under 63 on the final day was the joint-lowest in U.S. Open history. Koepka was the first player since Curtis Strange in 1988 and 1989 to retain the trophy.

A champion and his

Congrats to Brooks Koepka on another performance to remember! pic.twitter.com/EtyRJf9K7r

Possibly the most satisfying major win of them all for Koepka, who ignored the fanfare around a resurgent Woods to claim a two-shot triumph at Bellerive. Koepka set a new 72-hole PGA Championship record of 264 and was the first man since Woods in 2000 to complete a U.S. Open-PGA Championship double in the same year.

The third leg of a career Grand Slam was within reach at Augusta, where Koepka co-led after each of the first two rounds and was still very much in the hunt after 54 holes. Unfortunately for Koepka, an inspired Woods was unrelenting on a famous Sunday – ending an 11-year wait for a major victory to collect a fifth green jacket.

A new month for the US PGA but a similar theme. The records tumbled for three days at Bethpage Black and not even a final-round wobble denied Koepka a wire-to-wire success in Long Island, New York. Victory saw Koepka become the first player to be a two-time defending champion in two of the four majors at the same time.