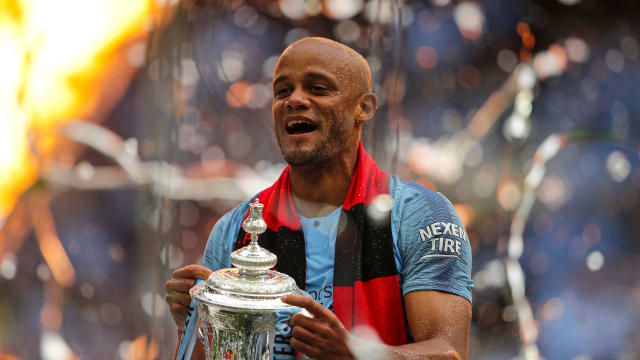 Vincent Kompany has played his final game for Manchester City, with the Premier League champions confirming that their captain is leaving the club.

The 33-year-old played a pivotal role in City winning an unprecedented domestic treble this season, making 24 appearances across all competitions and scoring one goal - a stunning long-range strike in the 1-0 win over Leicester City on May 6.

Kompany joined City in 2008, and went on to make 360 appearances for the club, winning the Premier League on four occasions, as well as lifting two FA Cups, four EFL Cups and two Community Shields.

But he has now called time on his City career, with the club announcing on Sunday - in the wake of their 6-0 FA Cup final triumph over Watford - that the Belgium international will not be signing a new contract.

In a statement released on City's website, Kompany said:  "As overwhelming as it is, the time has come for me to go. And what a season to bow out.

"I feel nothing but gratefulness. I am grateful to all those who supported me on a special journey, at a very special club. I remember the first day, as clear as I see the last. I remember the boundless kindness I received from the people of Manchester.

"I will never forget how all Man City supporters remained loyal to me in good times and especially bad times. Against the odds you have always backed me and inspired me to never give up."