Astros get 10th straight win with defeat of Red Sox 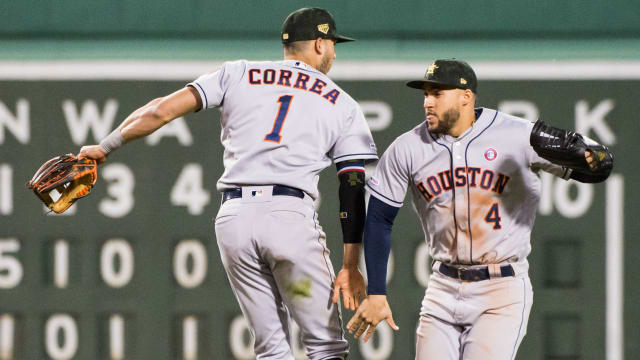 The Houston Astros continue to be the best team in MLB and after Saturday's win over the Boston Red Sox, they completed another impressive feat.

Houston became just the third team in MLB history to have multiple 10-plus game winning streaks before June 1. The only other teams to do that were the 1955 Los Angeles Dodgers and 1941 St Louis Cardinals.

It took a 7-3 victory against Boston to do so, but this game was decided well before the ninth inning.

The Astros opened with a five-run first inning and never looked back.

Michael Brantley, Josh Reddick, Yuli Gurriel and Tyler White all helped with the early scoring. Carlos Correa eventually got in on the action and Reddick again to cap off Houston's runs in the fifth inning.

Boston had just five hits – compared to the Astros' 13 – and were effectively shut down by Houston's relievers.

Josh James was awarded the win after three innings of work. Hector Velazquez took the loss.

Josh Bell has been a home run machine for the Pittsburgh Pirates. He had two homers against the San Diego Padres to become the franchise's first hitter with three multi-home run games in the same month since Brian Giles in August of 1999.

Los Angeles Angels star Mike Trout hit his 250th home run and it was a doozy. The 473-foot homer against the Kansas City Royals put Trout in a rare category. He became just the second player to hit the 250 mark before the age of 28, joining Alex Rodriguez.

The Mets could never get it going and fell to the lowly Miami Marlins 2-0. New York recorded just one hit off the bat of lead-off hitter Jeff McNeil while five others, with three or more at-bats, laid a big goose egg.

Freddie Freeman ended things against the Milwaukee Brewers with a walk-off solo home run in a 4-3 Atlanta Braves win in 10 innings.

Bryce Harper is a walking highlight reel. He recorded the longest home run (466 feet) by a Philadelphia Phillies player at home since the start of the Statcast Era. They went on to beat the Colorado Rockies 2-1.

Bryce OVER the batter's eye. pic.twitter.com/b3Lluj0neQ

The Dodgers would like a redo. Los Angeles came up empty, literally, in Game 2 of a three-game series against Cincinnati. They will duel it out in the rubber match on Sunday. Ryu Hyun-jin (5-1, 1.72) will start for the Dodgers and the Reds will send Tanner Roark (3-2, 3.50) to the hill.