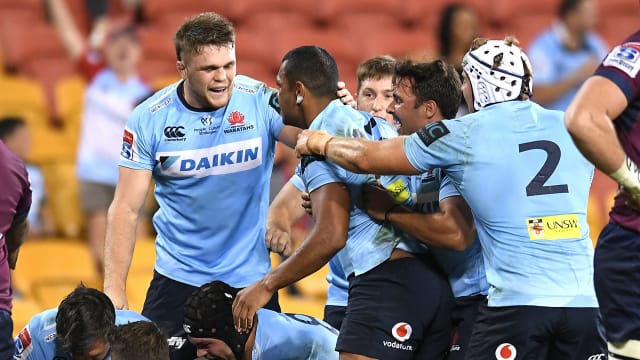 The Reds ran in six tries but still suffered an 11th straight Super Rugby loss to the Waratahs, while the Blues ended a 15-game losing run against the Chiefs at Eden Park.

Bernard Foley registered a try and 20 points from the tee as the New South Wales side edged out their Queensland rivals 40-32 in a tightly contested meeting at Suncorp Stadium.

Australia fly-half Foley got the Waratahs off the mark in the fourth minute, but the Reds hit back through Angus Blyth and Jock Campbell, the latter charging down the right after a fantastic offload from Samu Kerevi.

Michael Wells regained the lead for the visitors, only for tries from Sefanaia Naivalu and Bryce Hegarty, who went over after Chris Feauai-Sautia intercepted a pass from Foley, either side of the interval to help send the Reds eight points clear.

Hegarty showed tremendous footwork to dot down under the posts in response to Alex Newsome's score, before Foley converted Wells' second of the match to send the Waratahs one point clear with 25 minutes remaining.

Alex Mafi set up a tense finale when he crossed in the 65th minute, but a trio of late penalties from Foley ensured it was Daryl Gibson's side that triumphed.

11 in a row The Templeton Cup is staying in NSW.#REDvWAR#ForTheLoveOfRugbypic.twitter.com/2IctK0vEye

The Blues claimed a first win over the Chiefs since 2011 - and boosted their play-off hopes by picking up a bonus point in the process - with a 23-8 triumph.

Scott Scrafton did brilliantly to hold up Jesse Parete but Chiefs took the lead when Rieko Ioane's attempt to offload Etene Nanai-Seturo's kick to the corner was seized upon by Mitch Karpik in the 17th minute.

Harry Plummer's first Super Rugby try was followed by scores for Melani Nanai and Ofa Tu'ungafasi, who made it a 10-point game on the hour mark in controversial fashion.

The All Black prop's effort was allowed to stand despite him appearing to lose control of the ball amid contact with a Chiefs player as he powered over the line.

New Zealand flanker Sam Cane was denied a try when it was deemed he propelled himself forward in the tackle and Gerard Cowley-Tuioti scored after the hooter to seal a memorable victory.

Blues v Chiefs | Super Rugby 2019 Rd 14 Highlights
The @BluesRugbyTeam stay in the finals hunt by breaking a derby hoodoo against the @ChiefsRugby with a 23-8 win in Auckland.#SuperRugby#BLUvCHIpic.twitter.com/Y6InPuyPem