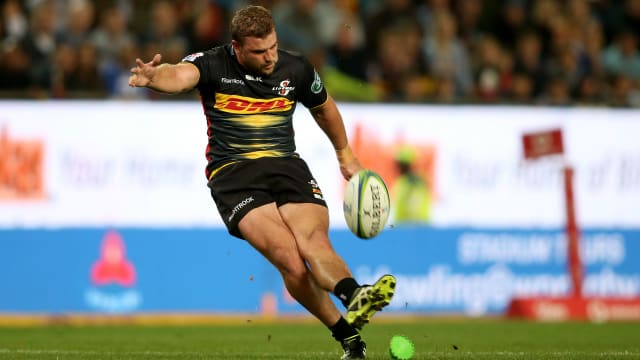 Jean-Luc du Plessis kicked a penalty at the death as Stormers grabbed a surprise 19-19 draw against the Crusaders at Newlands, while the Lions beat the Highlanders in an entertaining Super Rugby encounter.

Defending champions the Crusaders extended their lead atop the New Zealand conference to nine points, but had to settle for their second draw in their last three matches after a dramatic finish ended a seven-match winning streak against Saturday's opponents.

Siya Kolisi's early converted try along with a penalty from Joshua Stander had the Stormers in a surprise 10-0 lead, though the visitors were in front by half-time courtesy of Matt Todd and David Havili going over.

Braydon Ennor's converted try early in the second half had the Crusaders nine points in front but penalties from Stander and Du Plessis reduced the gap back to three before a dramatic finale.

Crusaders thought they had sealed victory when Sevu Reece sped over the line, only for the try to be controversially ruled out as Ennor's pass to the wing was adjudged to have been forward after a TMO intervention.

The Stormers, who remain bottom of the South African conference, were then awarded a penalty for a high tackle and opted for Du Plessis to kick for three, despite pleas from the home support for them to go for touch and seek victory.

Breathless stuff in Cape Town as the @THESTORMERS clinch vital points at the end to get the 19-19 draw against the visiting @crusadersrugby.#SuperRugby#STOvCRUpic.twitter.com/8hNxvmvL5v

At Ellis Park, the Lions won an entertaining clash against the Highlanders 38-29, ending a three-match losing streak at home to New Zealand opposition.

Both teams scored five tries, but the boot of fly-half Elton Jantjies, who kicked 13 points, ended up proving decisive.

Jantjies converted all five of the hosts scores, two of which came from flanker Kwagga Smith, and added a penalty, while the visitors only converted two of their tries.

Three Highlanders tries, including Matt Faddes' first away score in the competition since 2017, came in the second half but they could not match the Lions and fell to a first defeat in five.

The Lions secured a gritty victory against the Highlanders in a ten-try thriller at Johannesburg.