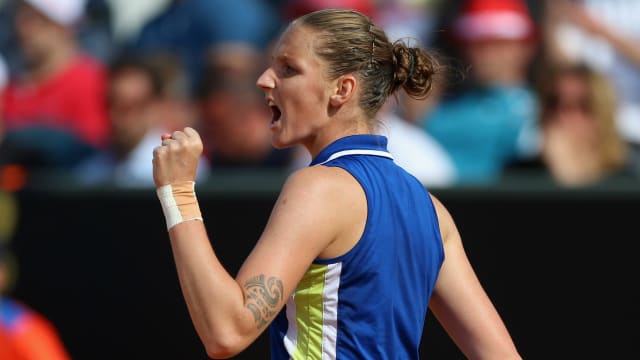 Karolina Pliskova had no need to repeat her histrionics from a year ago as she defeated Maria Sakkari to set up an Internazionali d'Italia final against Johanna Konta, who defeated the in-form Kiki Bertens.

It was at the same tournament in Rome in 2018 that the usually placid Pliskova lost her cool in a round-two match with Sakkari over a disputed line call, leading to the Czech smashing her racket against the umpire's chair and ultimately receiving a fine.

But Pliskova was all smiles after Saturday's semi-final against her Greek opponent as the fourth seed ran out a 6-4 6-4 victor to reach Sunday's showpiece.

Sakkari claimed the first break to take a 2-1 lead that she consolidated, only for Pliskova to hit back after a short break for rain.

Pliskova made it four games in a row by breaking again to take the first set and both players had to save break points early in the second.

It looked as though the set may be headed for a breaker until Sakkari once again failed to hold at 5-4 down, with Pliskova clinically breaking to love.

.@KaPliskova is through to her third final of the year!

Bertens was heavy favourite against Konta having won eight straight matches on clay, including winning the title in Madrid.

Konta scored a first top-five win in over two years, though, recording a 5-7 7-5 6-2 triumph in the Italian capital.

The Briton had the chance to serve out for the first set but lost three straight games to cede the advantage.

But a crucial break at 5-5 in the second set the tone for a final-set cruise and Konta is now into her biggest final since winning the Miami Open in 2017.