Man City are the best team in the world - Kompany 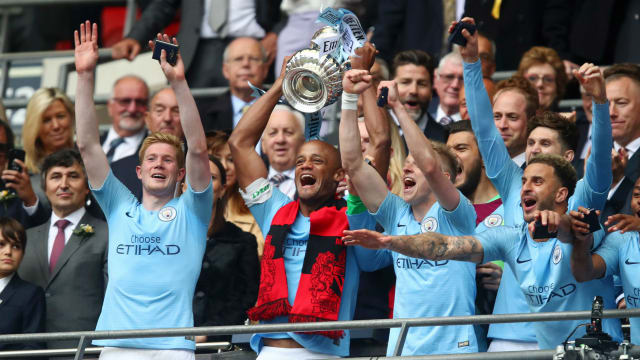 Vincent Kompany declared Manchester City the world's best side after they crushed Watford 6-0 to win the FA Cup and secure an unprecedented domestic treble on Saturday.

City were truly irresistible at Wembley, dominating from start to finish as they swept Javi Gracia's men aside with consummate ease.

The victory equalled the biggest FA Cup final win and rounded off another glorious campaign for Pep Guardiola's men, leaving Kompany with no doubt City are the best.

"It's the best team in the world for me," Kompany told BBC Sport. "To set such a high standard, I'm not talking one year, but two years in a row, it's a privilege.

"The first half was difficult. Second half, as soon as we scored the two goals, they had to come and press, it opened up the game for us and it made it more achievable to make chances.

"It wasn't as easy as the score says, but what a season, what a tremendous club.

"It starts with the manager. We set the standard at the beginning of the season and said we had to go again, go back-to-back [win successive Premier League titles].

"It's the group, a positive group of young players with talent, and of course quality."