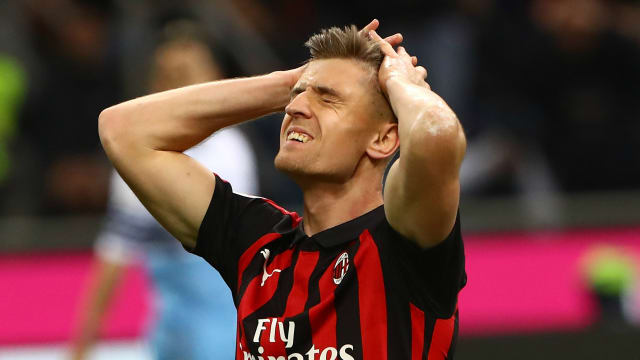 Gennaro Gattuso challenged Krzysztof Piatek to focus solely on doing his part for AC Milan as the struggling striker grapples with a goal drought.

Poland striker Piatek has gone six games without scoring in all competitions, last finding the net in the 2-1 defeat to Juventus on April 6.

The lean streak is a vast departure from the scintillating form that saw him torment opposition defences upon arriving at San Siro in January.

Getting back to basics is the solution, according to his head coach.

"Piatek needs to think about what is good for the team," Gattuso told reporters.

"He has to make himself available and I've seen he's very fired up in that regard."

Piatek has a prime opportunity to find form when Milan entertain already relegated Frosinone on Sunday.

The Rossoneri must win to keep the pressure on rivals Inter and fourth-placed Atalanta in the race for the Champions League places, although Gattuso is adamant finishing fifth would not be a failure.

"Absolutely not," he said. "And not because I want to give myself credit.

"There is regret, because for two months we had our fate in our hands and we lost so many points. But it's not been a failure.

"We must give everything to take as many points as possible from the last two games. Then we'll see."

Gattuso also took the opportunity to praise a former Milan head coach in Massimiliano Allegri, who is on his way out of Juventus at the end of the season.

"History speaks for itself with Allegri in terms of the statistics and what he's won," he said.

"We've argued and embraced each other since we were first together. There have been ups and downs but he's a genuine person and deserves the best. We have a unique relationship."