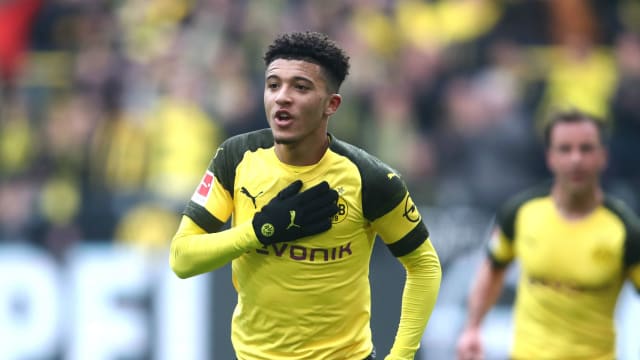 Borussia Dortmund's failed Bundesliga title bid will be remembered for lost opportunities, occasionally glittering football and the emergence of a world-class talent.

That talent is Jadon Sancho.

And while a league title would have been just reward for an outstanding campaign, the pain of losing out to Bayern Munich – who confirmed their triumph on Saturday by thumping Eintracht Frankfurt 5-1 – is at least tempered by unearthing one of Europe's rising stars.

The teenage winger gambled on his future when he left Manchester City in 2017, but the fruits of first-team football have paid off.

And these staggering Opta statistics present the picture of a player who, at just 19, could be set to take the world by storm.

Playing pinball in the box

A beautiful @BlackYellow team goal, finished off by @Sanchooo10  pic.twitter.com/WP2wGmgICt

Blossoming into a Bundesliga record-breaker

As much as his stock has risen this campaign, Sancho was fast-tracked for success upon his arrival at Dortmund for a fee reportedly around £8million in August 2017.

Sancho's promise was obvious and he finished his debut campaign with one goal to his name. Skip ahead 12 months and that number has soared to 12.

Sancho, now a full England international, became the youngest player in history to boast 12 Bundesliga goals when he netted the opener in a 4-0 thumping of Freiburg on April 21, and he is one of only two players - the other being Monchengladbach's Thorgan Hazard - in double figures for assists (14) and goals (12) in Germany's top flight this season.

What a season it's been for @Sanchooo10pic.twitter.com/GnPPF6yNkn

Hitting double figures in a single season is enough for any teenager to be earmarked for greatness and yet getting on the scoresheet is only part of Sancho's appeal as a multi-faceted attacking force.

His 14 assists are the most by an Englishman in one of Europe's big five leagues since Frank Lampard recorded the same number in the Premier League almost a decade ago.

More impressive still is that only Chelsea talisman Eden Hazard (15) has provided more this season and Sancho, in his 33 appearances top-flight appearances in 2018-19, has remarkably been involved in a goal every 95 minutes.

Consider that Dortmund have scored seven fewer times than Bayern and the scale of the Londoner's importance to his club becomes abundantly clear.

Congratulations to @Sanchooo10, whose stunning volley was voted February's Bundesliga Goal of the Month pic.twitter.com/1D6YIwqc1V

Top of the class

Less than six months on from securing a fourth-place finish at the World Cup, Gareth Southgate drafted Sancho into his England squad as part of a crop of "exciting young players" involving James Maddison and Mason Mount.

One player stands as the figurehead of his generation.

The attacking midfielder has scored five more times than Juventus striker Moise Kean, who stands as the only other player born in the 2000s to have hit more than three across Europe's big five leagues.

Compare him to Lionel Messi, at least in one department. The Barcelona captain is third for dribbles completed on 127, while Sancho's 111 rank him seventh.

18y 362d - Jadon Sancho is the third youngest England player to start a competitive international at Wembley, behind only Duncan Edwards (18y 183d) in 1955 and Michael Owen (18y 300d) in 1998. Adventure. pic.twitter.com/SIngeGKDBo

The evidence illuminating Sancho's status as one of Europe's elite footballers is compelling.

Manchester United, Real Madrid and more might come knocking but Dortmund, having encouraged Sancho's rare talent from the earliest opportunity, will not part easily with a player that could lead them to greater heights in the future.

It may well ultimately prove out of Dortmund's hands if Sancho decides to force a move, but with Reiss Nelson and Ademola Lookman also having enjoyed profitable loan spells, and Callum Hudson-Odoi a high-profile target of Bayern, the Bundesliga is proving an appealing destination for young English players to go and make their mark.