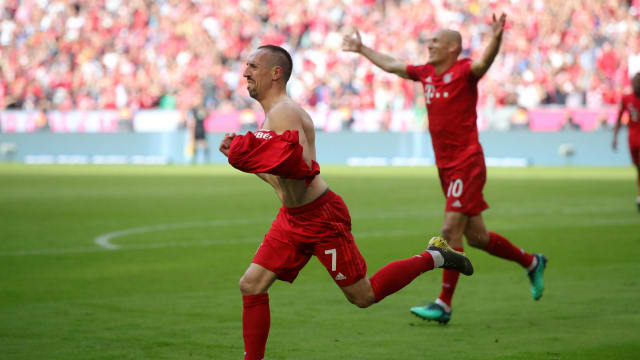 Franck Ribery and Arjen Robben scored on their final league appearances for Bayern Munich as they wrapped up a seventh consecutive Bundesliga title with a 5-1 win over Eintracht Frankfurt.

Niko Kovac's side had been locked in a pulsating race for the title with Borussia Dortmund but went into the final game of the season knowing a point would almost certainly see them retain their title.

Kingsley Coman set them on their way after just four minutes, although the visitors levelled entirely against the run of play in the 50th minute through Sebastien Haller.

Parity did not last long, however, as David Alaba and Renato Sanches scored in quick succession before Ribery and Robben came off the bench to wrap up the title in style in the final 20 minutes.

Coman ran onto Thomas Muller's pass and slotted past Kevin Trapp from 12 yards for his sixth Bundesliga goal of the campaign, and Bayern could have been out of sight within the opening 15 minutes had Trapp not produced a hat-trick of excellent saves to deny Serge Gnabry, Alaba and Robert Lewandowski.

Gnabry had a strike ruled out by VAR after Lewandowski had strayed into an offside position in the build-up, while Jonathan de Guzman crashed against his own crossbar as Bayern continued to pile forward at every opportunity.

Those missed chances came back to haunt them five minutes after the restart, when half-time substitute Haller prodded home from after David Abraham's effort had bounced back off the crossbar.

Normal service was resumed just three minutes later, however, when Alaba raced in to tap home after Trapp had kept out Muller's effort from distance.

Sanches – who had replaced the injured Leon Goretzka in the first half – then put the result beyond doubt after 58 minutes, cutting in from the left and firing through Trapp for his first Bundesliga goal.

Ribery then signed off from the Allianz Arena in trademark fashion in the 72nd minute, jinking between two defenders and clipping superbly over Trapp for an emotional fourth.

Not to be outdone, though, Robben tapped in from Alaba's cross 12 minutes from time to kick-start the celebrations.

What does it mean? Bayern celebrate but Kovac cannot relax just yet

There were times this season where it looked likely that Bayern's dominance of German football appeared to be slipping. Kovac, though, just about kept things together amid near-constant speculation over his future to hold off the threat of Lucien Favre's exciting Dortmund side and secure yet another league title.

With the likes of Jose Mourinho and departing Juventus boss Massimiliano Allegri looking for work, the 47-year-old could still spend much of the off-season looking over his shoulder, though.

On the day when Robben and Ribery's glittering Bayern careers came to an end, Coman and Gnabry showed why the club do not need to spend big to replace them. The pair were dazzling in the wide areas and can surely expect to play as vital roles for Bayern in the coming years as their predecessors have over the past decade.

Few goalkeepers can concede five goals but consider themselves to have had a good day's work. The on-loan Paris Saint-Germain goalkeeper made a string of excellent saves to prevent his side from being on the end of an even more embarrassing scoreline but should have done better against Muller and Sanches.

Bayern turn their attention to claiming a domestic double when they face RB Leipzig in the DFB-Pokal final next Saturday, while Frankfurt are left to reflect on a season that petered out with no wins in seven.