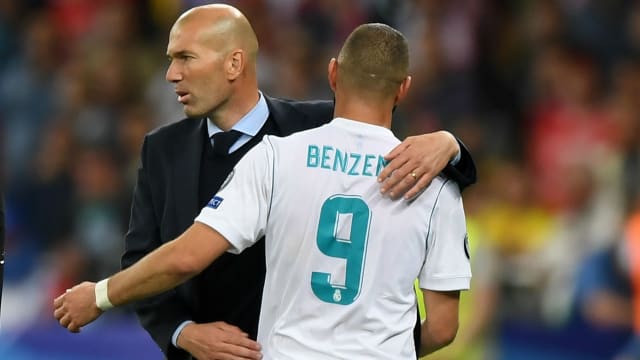 Karim Benzema talked up the relationship he has with Real Madrid coach Zinedine Zidane, adamant they are like brothers even if they occasionally "yell" at each other.

Zidane returned to Madrid in March following the sacking of Santiago Solari, the Frenchman having departed the club last May in the wake of winning a third successive Champions League title.

Benzema enjoyed his best season in terms of league goals under Zidane in 2015-16 when he netted 24 times and he was said to be particularly keen on the coach's return when Solari was dismissed.

Unsurprisingly Benzema has been similarly effective since Zidane's reinstatement, scoring eight times in as many games to take his season tally to 21.

And Benzema spoke highly of their relationship, even if they do not always appear to be close.

"I have a very strong relationship with him. He's like a big brother to me," Benzema said on the Quotidien TV show.

"We talk a lot about football and outside of football. He's helped me a lot. I have a lot of respect for him.

"Sometimes we yell at each other when I don't do what he asks on the pitch. You can say I'm the head of Real Madrid [the team], but it is above all the work of a team, not that of one player.

"A very good striker should not just score. He must be able to participate in the game, open spaces, help his team, make the right moves and obviously be present in the key moments."

Madrid finish their campaign on Sunday at home to Real Betis, with neither side having anything left to play for.