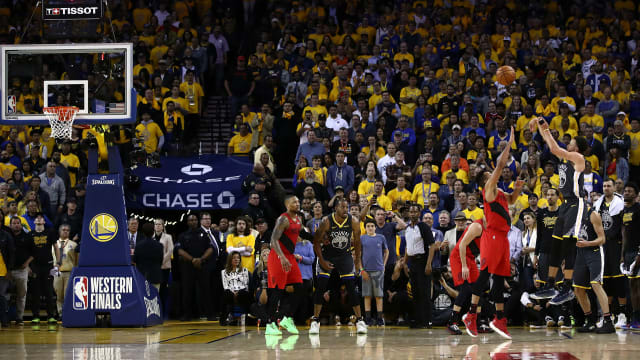 The Golden State Warriors and their quest for a third successive NBA title remains on track after the reigning champions earned a 2-0 series lead in the Western Conference finals.

Golden State came from behind to trump the Portland Trail Blazers 114-111 in Game 2 on Thursday.

The Warriors erased a 15-point half-time deficit to take control of the playoff series, which heads to Portland for Game 3 on Saturday.

Here are three takeaways from the Warriors' victory.

Iguodala makes big play when it matters most

Veteran Andre Iguodala did not have a great game.

The Warriors forward finished with four points on two-of-six shooting and missed all three of his three-point attempts. Yet, he came through for his team when they needed him most.

Andre Iguodala secures the Game 2 win for the @warriors with the CLUTCH STOP in the final seconds! #StrengthInNumberspic.twitter.com/F89fO0M4Xr

The Trail Blazers had a final chance to tie the score trailing by three points with less than 11 seconds remaining. Iguodala, however, stripped the ball away from Damian Lillard as he was attempting a three-pointer.

Curry was once again phenomenal for Golden State. He finished with 37 points, eight rebounds and eight assists to carry his team to a win.

Less than 1:20 remaining on @ESPNNBA. pic.twitter.com/xXAIDZAnJk

Durant has been out since straining his calf in Golden State's Game 5 win over the Houston Rockets and he is not expected to play in either of the next two matchups.

Without Durant, Curry scored 33 points to help Golden State close out the Rockets and followed that up with 36 points in Game 1 against Portland. The Warriors will need him to continue playing at that level.

The Warriors received unexpected contributions from multiple players off their bench on Thursday.

This series could be a short one if Golden State's role players continue to make an impact.