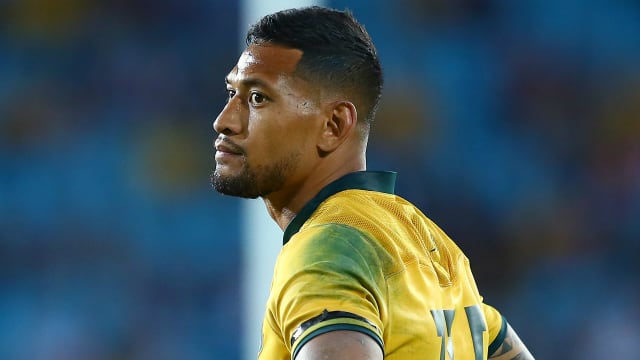 Wallabies and Waratahs star Israel Folau officially had his contracted terminated by Rugby Australia, it was confirmed on Friday.

Rugby Australia sacked Folau over anti-homosexual social media posts following a hearing, in which the Australia international was found guilty of a "high-level breach" of the RA's code of conduct.

A three-person panel considered a sanction after Folau contested the breach notice issued to him in the aftermath of a post in April that said "hell awaits drunks, homosexuals, adulterers, liars, fornicators, thieves, atheists and idolators", having been warned by RA for similar comments last year.

And the country's governing body decided to terminate Folau's four-year, multi-million-dollar contract, though the 30-year-old and devout Christian has 72 hours to appeal.

Folau – who made 62 appearances for Australia and won the 2014 Super Rugby title with the Waratahs – is reportedly set to launch legal action.

Those that are living in Sin will end up in Hell unless you repent. Jesus Christ loves you and is giving you time to turn away from your sin and come to him. _______________ Now the works of the flesh are manifest, which are these , adultery, fornication, uncleanness, lasciviousness, idolatry, witchcraft, hatred, variance, emulations, wrath, strife, seditions, heresies, envyings, murders, drunkenness, revelings, and such like: of the which I tell you before, as I have also told you in time past, that they which do such things shall not inherit the kingdom of God. Galatians 5:19‭-‬21 KJV _______________ Then Peter said unto them, Repent, and be baptized every one of you in the name of Jesus Christ for the remission of sins, and ye shall receive the gift of the Holy Ghost. Acts 2:38 KJV _______________ And the times of this ignorance God winked at; but now commandeth all men every where to repent: Acts 17:30 KJV _______________

"While Rugby Australia accepts the panel's decision directing termination of Israel Folau's playing contract for his high-level breach of the Code of Conduct, we want to stress that this outcome is a painful situation for the game," RA chief executive Raelene Castle said.

"Rugby Australia did not choose to be in this situation, but Rugby Australia's position remains that Israel, through his actions, left us with no choice but to pursue this course of action.

"This has been an extremely challenging period for Rugby and this issue has created an unwanted distraction in an important year for the sport and for the Wallabies team.

"But our clear message to all Rugby fans today is that we need to stand by our values and the qualities of inclusion, passion, integrity, discipline, respect and teamwork.

"I've communicated directly with the players to make it clear that Rugby Australia fully supports their right to their own beliefs and nothing that has happened changes that. But when we are talking about inclusiveness in our game, we're talking about respecting differences as well.

"When we say rugby is a game for all, we mean it. People need to feel safe and welcomed in our game regardless of their gender, race, background, religion, or sexuality. We thank the tribunal panel for their decision and we respect the time, consideration and expertise the panel members brought to this process.

"Representing Australia and all Australians on the rugby field is a privilege. Selection is dependent upon a player's ability to contribute to the Wallabies, and the game of rugby itself, in a positive and consistent manner both on and off the field. When players sign a contract with the Wallabies, they sign up to the values of the team and the sport.

"Israel is a great rugby player and we are disappointed and saddened by the fact that he will not see out his four-year commitment to the Wallabies and Waratahs."