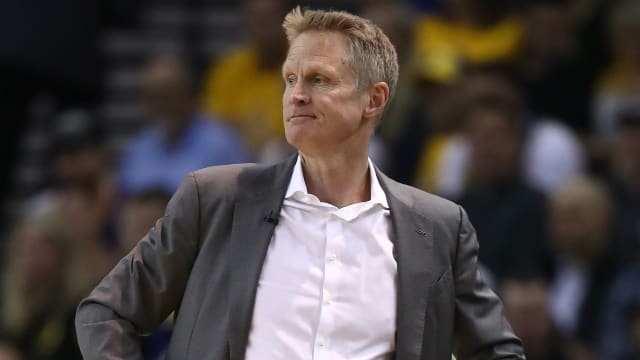 Kevin Durant's calf strain is a little more serious than the Golden State Warriors first thought, Steve Kerr said after they moved 2-0 ahead in their Western Conference Finals series with the Portland Trail Blazers.

Durant was again a spectator as the Warriors came from behind to beat the Trail Blazers 114-111 in Oakland on Thursday, having suffered his injury in Game 5 of the semi-final series with the Houston Rockets.

Prior to the game, the Warriors provided an update in which they said Durant is not ready to return to on-court work.

And asked about the two-time Finals MVP in his post-game media conference, Kerr said: "It's a little more serious than we thought at the beginning... Hopefully he'll be back at some point."

The Warriors trailed by 15 points at half-time and were still down by eight with four-and-a-half minutes left, and Kerr conceded they were fortunate come away with the victory.

"We stole that game," Kerr added. "They outplayed us."

Two-time MVP Stephen Curry again got the better of younger brother Seth, scoring 37 points in 39 minutes while his younger sibling tallied 16 off the bench for the Blazers.

"This was like the coolest experience I think I've ever had playing against him," Stephen Curry said. "We talked about the stage and he was amazing tonight.

"Every minute he was out there defensively he was a pest, made three big shots in the fourth quarter, very timely. For my parents, I know we've talked about it the whole series and these last two games, it's probably nerve wracking as heck for them, but it worked out perfectly tonight, he played well and we won.

“He was amazing tonight!”@StephenCurry30 on playing against his brother @sdotcurry in the Western Conference Finals! #NBAPlayoffspic.twitter.com/9iehayGT0U

"He tried to distract me at the free-throw line in the fourth quarter and I knew how to go back at him but stay focused on what I needed to do. It's just fun.

"I had to catch myself a couple of times because I do want to go over and have a little small talk or whatever, but you've got to stay locked in."

Revealing what he said to try to distract his older brother, Seth said: "He made the first [free throw], I told him that's like 70 in a row.

The series shifts to Portland on Saturday, when the Warriors will look to take a 3-0 lead.