What did he do? He hurt a chair? – Federer plays down Kyrgios suspension talk 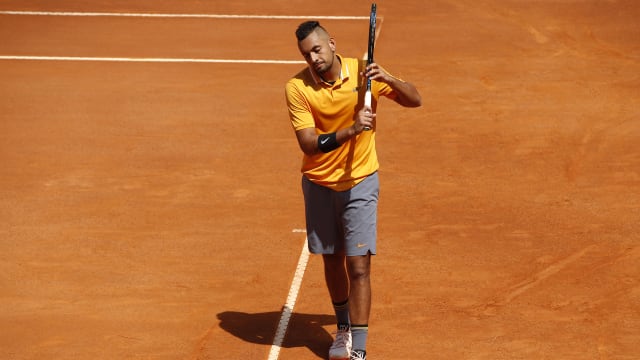 Roger Federer insisted Nick Kyrgios should not be suspended for his meltdown at the Internazionali d'Italia on Thursday.

A furious Kyrgios defaulted his second-round match against Casper Ruud after receiving a game penalty for throwing a folding table onto the court.

The Australian smashed his racquet and launched a table before walking off after shaking hands with Ruud and the chair umpire.

However, Federer said a fine and forfeiture of prize money and rankings points were punishment enough for Kyrgios.

"I don't think he should be suspended personally," Federer said after edging Borna Coric in the last 16.

"He walked off the court. What did he do? He hurt a chair? I mean, that's not enough for me.

Kyrgios gets a game penalty and then walks off court, handing Casper Ruud a place in the last 16#ibi19pic.twitter.com/T4jhvbV1RN

"I don't know if he's on probation or not from his Shanghai thing [walking off the court in 2017] or not.

"If that's the case, then obviously you can maybe look into it. If that's run its course, I don't think he should be suspended.

"A zero pointer, fine, all this stuff is already tough enough. He knows it's a mistake what happened."

Kyrgios' clash with Ruud was early in the third set when the 24-year-old defaulted.