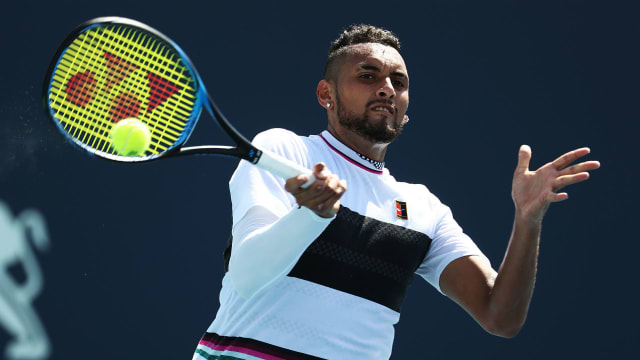 Kyrgios has never been afraid to speak his mind and the controversial Australian did not hold back when asked for his thoughts on Djokovic and Nadal.

The world number 36 spoke of his respect for Roger Federer, but has very different feelings about another two of tennis' modern-day greats.

"I just feel like he has a sick obsession with wanting to be liked. He just wants to be like Roger," Kyrgios told the No Challenges Remaining podcast with Ben Rothenberg when asked what he thinks of world number one Djokovic.

"I feel like he just wants to be liked so much, that I just can't stand him. This whole celebration thing that he does, it's like so cringeworthy. He's a champion of the sport, one of the greatest we'll ever see, I think he will pass Federer [in terms of grand slam wins].

"We're talking about a guy who pulled out of the Australian Open one year because it was too hot. No matter how many grand slams he wins, he will never be the greatest for me. Simply because I've played him twice and, I'm sorry, but if you can't beat me, you're not the greatest of all time.

"Because if you look at my day-to-day routine and how much I train and how much I put in, it's zero compared to him. For me Federer will always be the greatest of all time, hands down.

"Djokovic just rubs me the wrong way, always says what feels like he needs to say, never speaks his opinion. These guys - they're not bad guys.

"The celebration just kills me. Honestly, that's what I'm doing next time: if I play him and I beat him, I'm doing his celebration, in front of him. That will be hilarious, right."

Had to be done @NickKyrgios@andy_murray#ibi19pic.twitter.com/FEXdE2SBF2

Nadal accused Kyrgios of lacking respect after he delivered an underarm serve against the Spaniard in Acapulco in February and the Canberra native could not resist the opportunity to reignite their feud.

"When he wins, it's fine. He won't say anything bad, he'll credit the opponent - 'he competed well today, he's a great player', but then as soon as I beat him, it's just like 'he has no respect for me, my fans and no respect for the game' - and I'm just like 'what are you talking about?'

"Uncle Toni came out saying 'he lacks education'. I'm like, bro, I did 12 years at school, you idiot - I'm very educated. I understand you're upset that I've beat your family again, but I'm not going to be the same as Nadal. We do things differently, why can't we just accept that. Don't wait til you lose a match to say things.

"When I say something after I play him, it's not going to get noticed as much. But when he says something, it's like the only thing that matters. And then everyone's like, 'oh yeah, he must be right, this guy must lack education, he must lack respect'. These guys show me no respect, none. So why would I show you respect?"

Kyrgios had nothing but good things to say about the legendary Federer.

He said: "The first thing that comes to mind is the greatest of all time, for me. His talent level is off the charts. His movement and just his preparation, the way he reads the game is second to none.

"For anyone who wants to play sport, they just want to be like Federer. Everyone kind of wants a little bit of Roger in their game. He's so talented, for sure the best."