Nick Kyrgios has been defaulted from the Italian Open.

The volatile Australian was playing his second-round match against Norway's Casper Ruud at the Foro Italico and had levelled the clash at one set all after losing the opener.

After Ruud broke back to make it 1-1 in the deciding set, Kyrgios was given a game penalty, apparently for swearing at a line judge, and promptly exploded.

He slammed his racket down, kicked a water bottle and then hurled a chair onto the court. 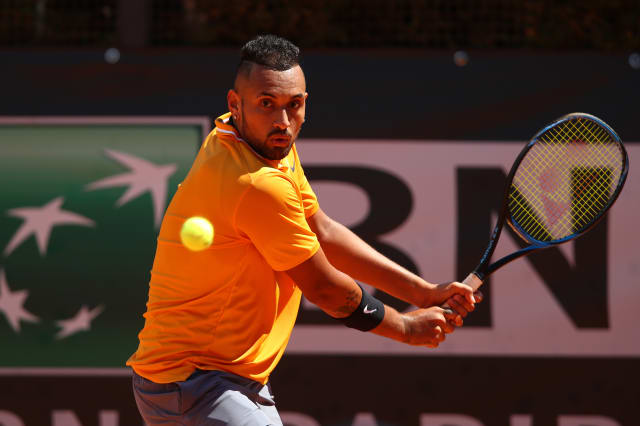 The umpire called the referee to court but, before he could be officially defaulted, Kyrgios told the crowd 'I'm done', packed up his bag and walked off to loud whistles and jeers.

It is far from the first controversy Kyrgios has been involved in and the Australian, who will automatically forfeit his prize money, is sure to face a heavy fine at the very least.

The 24-year-old was given a ban by the ATP in 2016 after walking off court midway through a match against Mischa Zverev at the Shanghai Masters and may well find himself suspended again.

Kyrgios' antics came only 24 hours after he laid into the sport's biggest stars in an interview on the No Challenges Remaining podcast, saying he 'could not stand' Novak Djokovic and calling Rafael Nadal "super salty".

After Wednesday's wash-out it was a packed schedule in Rome, with Nadal, Djokovic and Roger Federer all due to play again on Thursday after winning their second-round matches.