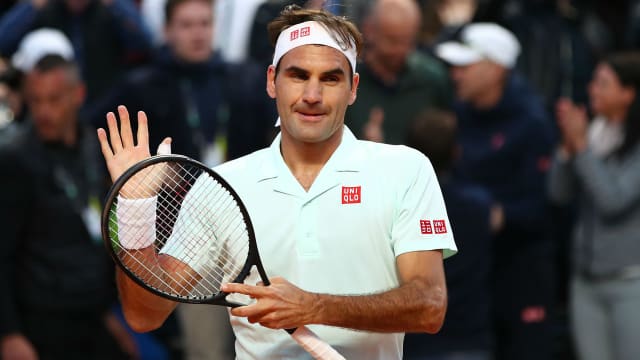 Novak Djokovic, Roger Federer and Rafael Nadal all won twice on Thursday as tournament organisers made up for lost time at the Internazionali d'Italia.

After rain wiped out Wednesday's proceedings in Rome, a busy schedule saw the leading trio appear in both the day and evening sessions - and they all progressed through to the quarter-finals.

However, while Djokovic and Nadal breezed through in both of their outings, Federer was forced to save two match points against Borna Coric before eventually coming through in a tense tie-break in the deciding set.

Earlier in the day, Nick Kyrgios defaulted his match with Casper Ruud after receiving a game penalty for throwing a folding table onto the court during the third set.

The Australian's reaction followed a disputed call early in the third set, though Ruud's run in the tournament ended later on when he lost in straight sets to Juan Martin del Potro, who will face Djokovic next.

Who thirsty out here?

EASY DOES IT FOR TOP TWO

While pressed into doing overtime, neither Djokovic nor Nadal had to work hard.

Nadal was even more emphatic in his second outing, thrashing Nikoloz Basilashvili 6-1 6-0. The Spaniard - still chasing his first title in 2019 after semi-final exits in Monte Carlo, Barcelona and, most recently, Madrid - had earlier dismissed Jeremy Chardy in equally emphatic fashion, their one-sided meeting finishing 6-0 6-1.

Next up will be compatriot Verdasco, who upset seeds Dominic Thiem and Karen Khachanov to reach the quarters of a clay-court Masters 1000 event for the first time since May 2012.

ROGER THE DODGER SURVIVES A SCARE

After saving two match points against Gael Monfils in Madrid last week, Federer once again had to battle back from the brink on clay.

Coric led 6-4 in the deciding tie break but was unable to close out the match on his own serve, hitting a forehand approach into the net. The next point saw Federer hit a service winner to stay alive, and he eventually prevailed 2-6 6-4 7-6 (9-7) after two hours and 31 minutes on court.

That was a rollercoaster @rogerfederer#ibi19pic.twitter.com/MW9PirqY40

"I got very lucky again today, like in Madrid. It's nice to get lucky I guess sometimes," a relieved Federer told the ATP Tour.

"I've lost a lot of heartbreakers throughout the years so it's nice to win these and the atmosphere was fantastic. People were going crazy. It's exactly how you want the atmosphere to be."

Stefanos Tsitsipas will face Federer on Friday, the Greek a straight-sets winner over Fabio Fognini in the final match of a packed schedule.