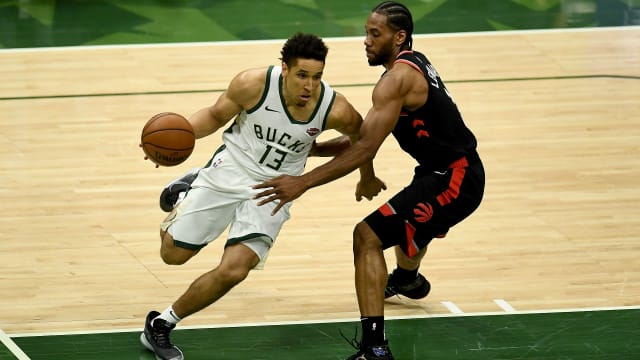 The Milwaukee Bucks moved one game closer to playing for a championship by overcoming the Toronto Raptors on Wednesday.

Milwaukee pulled out a 108-100 win over Toronto in Game 1 of the Eastern Conference finals at the Fiserv Forum.

The Bucks trailed by seven entering the fourth quarter but opened the period on a 20-8 run and held on for the win from there.

Brook Lopez scored a team-high 29 points for Milwaukee while Giannis Antetokounmpo finished with 24 points and 14 rebounds.

Brook Lopez does it all, scoring a #NBAPlayoffs career-high in the @Bucks Game 1 home victory! #FearTheDeer

Kawhi Leonard and Kyle Lowry combined for 61 points for the Raptors in the losing effort.

Here are three takeaways from the Bucks' Game 1 win:

This series should be a fun one

On paper, this series looked like it would be one of the most intriguing of the entire playoffs. After one matchup, that observation still stands.

Game 1 was by no means an offensive showcase, but both teams were evenly matched. Toronto and Milwaukee each relied on their stars while role players stepped up for both teams.

The matchup was tied with four minutes, two seconds left and the outcome was in doubt in the final minutes.

NOT IN GIANNIS' HOUSE!#FearTheDeer 108#WeTheNorth 100

Every game of the Eastern Conference finals has the potential to turn into a must watch.

It did not take Malcolm Brogdon long to make an impact.

The 26-year-old guard suffered a foot injury last month and did not return until the final game of the Bucks' conference semi-final series against the Boston Celtics. Milwaukee were thankful to have him on the floor on Wednesday.

Brogdon finished with 15 points on five-of-nine shooting while adding three rebounds and three assists in 27 minutes. He also finished a big fast break dunk midway through the fourth quarter that energised his team.

We see you, Prez!! #FearTheDeerpic.twitter.com/9uVTUswI3a

Brogdon will give the Bucks a big boost off the bench if he can continue to contribute in a big way.

It was not all good news for Milwaukee.

Despite the win, the Bucks were dreadful from long range. They finished 11 of 44 from behind the arc, a mark of 25 per cent.

Khris Middleton and Nikola Mirotic combined to hit just two of their 12 total three-point shots, Eric Bledsoe failed to connect on all six of his while Ersan Ilyasova missed three of his four triple attempts.

Milwaukee may not be able to afford to shoot like that again in this series.