Stotts: Trail Blazers will revisit how they guard Curry 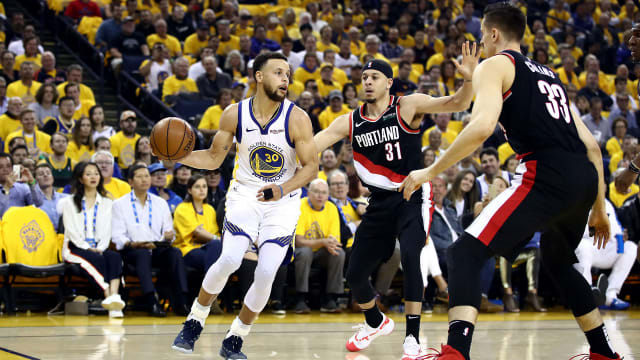 Portland sunk their big men instead of trapping on pick-and-rolls, which led to the Warriors knocking down 51.5 per cent of their three-point attempts in a 116-94 win in Game 1 of the Western Conference finals on Tuesday.

Curry picked apart the Trail Blazers in the victory, scoring 36 points on nine-of-15 shooting from behind the arc.

Portland coach Terry Stotts was asked if the team were planning to make adjustments when he met with reporters on Wednesday.

"I think we have to re-think it," Stotts said, via ESPN.

"So, it goes beyond that, but yes, we have to revisit what we want to do on pick-and-rolls."

Stotts' comments came one day after he was unhappy with a reporter for asking him about the team potentially changing their defense following Game 1. Stotts apologised at his news conference on Wednesday.

The Warriors will host Game 2 on Thursday.