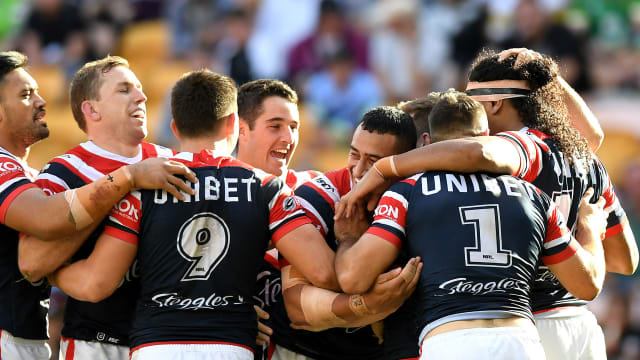 Sydney Roosters will return to Suncorp Stadium with a score to settle when they face Brisbane Broncos in Round 10 of the NRL on Friday.

Defending champions the Roosters, level on points with city rivals South Sydney Rabbitohs at the top of the ladder, have lost their past five away matches against the Broncos.

Trent Robinson's side beat Canberra Raiders in the inaugural Magic Round at Suncorp last weekend and will be looking to extend their winning run to eight matches.

The Rabbitohs face a tough trip to face the Raiders, while Gold Coast Titans and Canterbury Bulldogs do battle in a clash between two of the bottom three.

We pick out some Opta facts for the next round of matches.

- The Tigers have won their past two NRL matches against Melbourne, having never previously won consecutive games against them.

- Only the Bunnies' Damien Cook (823) has made more metres over the advantage line from dummy-half runs than Storm captain Cameron Smith (572) this season.

- Penrith have won four of their past five NRL matches against the Warriors, including their most recent encounter in the Qualifying Finals of 2018.

- The Broncos have won their past five NRL matches against the Roosters at Suncorp, despite leading at half-time only twice in those encounters.

- Cooper Cronk's next try will be his 100th in his NRL career. The Roosters playmaker has not crossed in his last nine NRL games against the Broncos.

- The Bulldogs won their last away game against the Titans but have never beaten them back-to-back on their travels.

- Versatile Titan Alexander Brimson has scored four tries in his most recent three NRL games when starting at full-back.

- The Cowboys have won five of their past six NRL games against the Eels at 1300SMILES Stadium, scoring an average of 41 points in the process.

- Parramatta's Clinton Gutherson has gained 1,446m over the advantage line this season, the second-most of any player in the competition.

- The Raiders have won four of their past five NRL matches against the Rabbitohs, including a 24-12 victory in their last encounter.

- Michael Oldfield has scored four tries in his three previous NRL matches against Souths, crossing at least once in each of those games.

- The Dragons have won 12 of their most recent 14 NRL matches against the Knights. This will be the first meeting between these sides at Glen Willow Oval.

- David Klemmer has gained 1,362m over the advantage line this season, the most of any forward and the third-most overall.

- Manly have won 15 of their past 17 NRL matches against the Sharks, including their most recent encounter, which was settled in extra time by a Daly Cherry-Evans field goal.

- Cronulla have scored nine tries via kicks this NRL campaign, the most of any team in the competition, while the Manly (10) have conceded the most as a result of kicks.