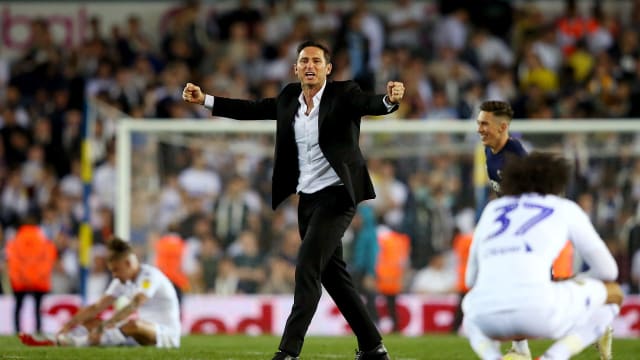 Derby County came from behind to beat Leeds United 4-2 at Elland Road and book a showdown with Aston Villa in the Championship play-off final.

Leeds secured a 1-0 win at the weekend – a third victory out of three against Derby this season for Marcelo Bielsa's men in a rivalry that simmered in the aftermath of the "spygate" controversy.

Bielsa's opposite number Frank Lampard had the last laugh, however, with Jack Marriott's introduction from the bench proving pivotal as the forward struck a decisive brace.

Leeds full-back Stuart Dallas also hit a double but his defensive colleagues malfunctioned after his opener, with Mason Mount on target and Harry Wilson converting a 58th-minute penalty before each team had a player sent off.

Wow. Wow. Wow. @DCFCOfficial become the first-ever side to reach the @SkyBetChamp Play-Off Final after losing the first leg at home.

Bolstered by their first-leg advantage, Leeds seemed intent on ending the argument as they pinned Derby back during the opening stages.

The visitors held out for 24 minutes, when Kalvin Phillips' free-kick swung in from the left and came back off the post to leave Dallas with a tap-in.

Mateusz Klich then saw a deflected drive hit the crossbar but Derby levelled against the run of play on the stroke of half-time – substitute Marriott having an instant impact as he capitalised on a mix-up between Liam Cooper and Leeds goalkeeper Kiko Casilla.

Mount hauled Derby level in a tie turned on its head 38 seconds into the second half, digging out a fabulous finish to cap a solo run, and the woefully erratic Casilla was similarly helpless when Cooper pulled back Mason Bennett to concede a penalty that Wilson converted.

As the chant from Derby's away following suggested, Leeds appeared to be falling apart, only for Dallas to dart onto Klich's cute pass and clinically dispatch his second of the game.

But a period in the ascendancy for Bielsa's side ended when Gaetano Berardi received a second yellow card for a rash challenge on Bradley Johnson in the 78th minute.

Five minutes from time, Keogh played in Marriott for a delightful dinked finish and Derby held out despite Scott Malone's stoppage-time dismissal, becoming the first team to progress from a Championship play-off semi-final having lost the first leg at home.