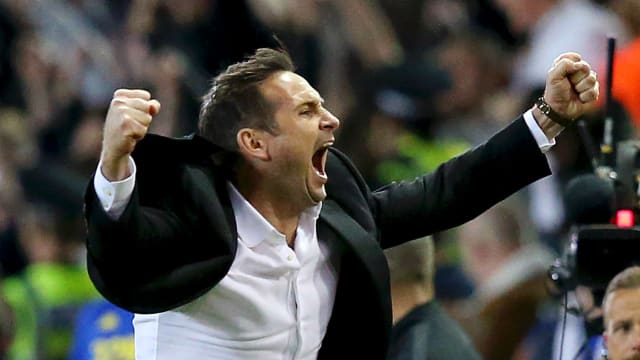 Derby County poked fun at Leeds United over their song about manager Frank Lampard after booking a place in the Championship play-off final.

The two-legged clash between the clubs was always likely to be a spicy affair after Leeds boss Marcelo Bielsa admitted spying on the Rams ahead of a league game in January.

Leeds fans taunted Lampard with a rendition of Oasis classic Stop Crying Your Heart Out that made reference to the 'spygate' row after their 1-0 first-leg victory.

But Derby battled back to set up a winner-takes-all meeting with Aston Villa despite falling behind in the return at Elland Road on Wednesday, in a clash in which both sides were reduced to 10 men.

Jack Marriott came off the bench to score twice as Derby ran out 4-2 winners on the day, with Rams players referencing the 'spygate' incident with a binoculars celebration after full-time.

Derby's official club Twitter account wasted no time in returning fire at Leeds over the Lampard song ahead of his Chelsea reunion with Villa assistant John Terry in May 27's final.

His claims were quickly cast into doubt, though, as Derby player Duane Holmes shared a clip of Lampard joining in with the Oasis song amid dressing-room celebrations.