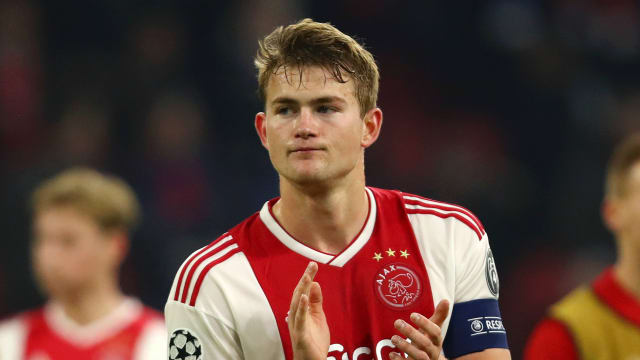 Ajax captain Matthijs de Ligt insisted he was still assessing his future amid links to Barcelona and the Premier League.

De Ligt, 19, is widely expected to leave Ajax – who sealed the Eredivisie title on Wednesday – in the off-season.

The centre-back has been linked to the likes of Barcelona, Liverpool, Manchester United, Juventus and Bayern Munich.

But after Ajax beat De Graafschap 4-1 for their first league title since 2014, De Ligt said he needed time to consider his future.

"This is not the time to talk about my future," he told Fox Sports.

"I don't know if I will go with Frenkie de Jong [to Barcelona]. I still have to analyse things and see everything. We'll see what happens.

"I cannot say anything. We'll see at the end of summer. There is nothing yet."

ONE CHAMPIONSHIP,
SO MANY EMOTIONS!

Ajax's league triumph saw them claim a domestic double after also winning the KNVB Beker, easing some of the pain following their Champions League semi-final exit.

De Ligt was delighted with Ajax's campaign, saying: "It is indescribable. We have been craving this for five years.

"I enjoyed the cup, the competition, the Champions League and especially the team spirit."