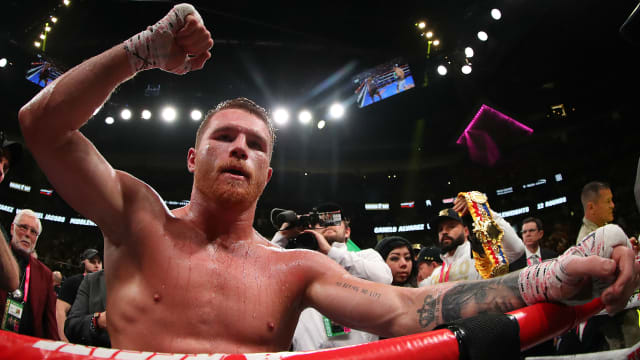 Saul 'Canelo' Alvarez has been ordered to defend his new IBF middleweight world title against Sergiy Derevyanchenko by August 4.

The Mexican star defeated Daniel Jacobs on points in Las Vegas on May 4 but has already been told to make a mandatory defence after the International Boxing Federation (IBF) sent a letter to Golden Boy Promotions.

"Negotiations should commence immediately and be concluded by June 15, 2019," the IBF wrote, going on to add the fight must take place "on or before" August 4.

Alvarez, who also holds the WBA and WBC crowns at middleweight and signed a lucrative deal with broadcaster DAZN last year, will see the fight go up for a purse bid if the two camps do not reach an agreement in time.

"It's really surprising and unfortunate that we didn't get a congratulations letter [from the IBF] like we would in the past," Eric Gomez, Golden Boy Promotions president, said to ESPN. "We will be meeting with Canelo in the next week or so to see what he would like to do."

It is unlikely Alvarez will fight before August 4, with his next outing provisionally scheduled for September 14, the weekend of Mexican Independence Day.

Gracias por todo, Vegas! Thanks for all, Vegas! #TBT#DoItYourWaypic.twitter.com/dDrLnySK0Z

The 28-year-old could request an extension to the date or seek a unification bout in order to avoid his mandatory defence. If a solution is not found, he may have to vacate the newly won belt.

Rival Gennady Golovkin, who he has fought in two epic bouts, has been tipped to face him in a third contest, though the Kazakh must first defeat Steve Rolls on June 8.

Alvarez (52-1-2) could also face the winner of the WBO title fight between unbeaten American Demetrius Andrade and Maciej Sulecki having previously made clear his desire bid to hold all four of the major belts in the division.

Briton Billy Joe Saunders has also called out the in-demand Alvarez this month.

Ukrainian Derevyanchenko, meanwhile, has 13 wins and one defeat – which came against Jacobs via a split-decision verdict last October - on his record.