Antetokounmpo is a 'Magic Johnson-ish kind of' player, says Robinson 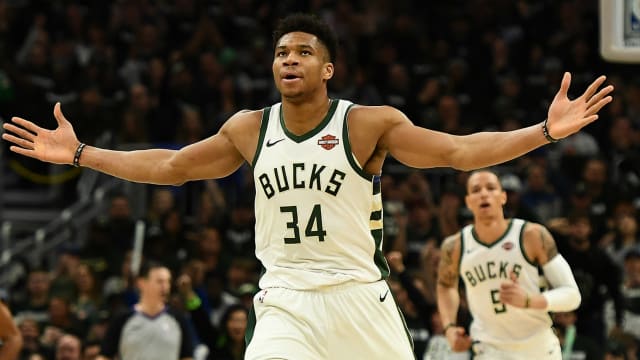 Antetokounmpo has a case to be the best player left in the NBA playoffs and has already left the Boston Celtics and Detroit Pistons in his wake, helping the Bucks win their first two playoff series in a total of nine games while averaging 27.4 points.

He is leaving fans and legends alike in awe, including former Spurs star Robinson.

"His growth has been phenomenal," Robinson told Omnisport, courtesy of Johnsonville. "I see a lot of the things that I had to learn that he's doing.

"Physically he's getting stronger, he's just grown into this beast now, and it's so much fun to watch him play, to see such a big guy handle a ball like that, really be able to make the passes and lead the offense, he's kind of a Magic Johnson-ish kind of guy but with even more of a post presence.

"You see a point guard dunking on people the way he dunks on people, it's just comical almost."

Had a great time grilling out with @Johnsonville and @the_USO last night in honor of Military Spouse Appreciation Day. Big thanks to all that serve our great country both at home and abroad. #Sponsoredpic.twitter.com/nnO0ydnK8B

While many of the headlines in recent days have surrounded another Eastern Conference star in Kawhi Leonard, who carried the Toronto Raptors to a conference semi-final win over the Philadelphia 76ers with 243 points and a game-winning shot in Game 7, Antetokounmpo quietly dominated the Celtics and earned the Bucks their first conference finals berth since 1999-00.

Antetokounmpo is called a freak for a reason, but the matchup with Leonard will be an intriguing one, as they could very well face off on both ends of the floor in the Eastern Conference finals.

"It would be interesting to see because, you know, obviously you don't want to get Kawhi in foul trouble either, so there's a risk there, but you know, Kawhi is experienced and tough and I mean, I can't wait to see what they're going to try and do."

The Raptors and Bucks will face off in Game 1 on Wednesday.