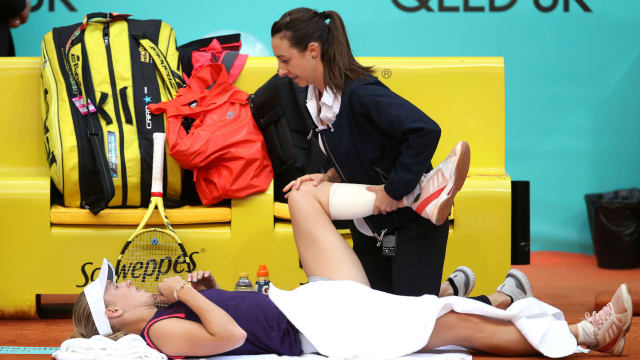 Caroline Wozniacki retired from the Internazionali d'Italia after suffering another injury setback during her first-round match against Danielle Collins.

Wozniacki was unable to complete her opening encounter with Alize Cornet at the Madrid Open last week due to a back injury.

The luckless former world number one made another early exit in Rome on Tuesday due to an issue with her calf.

Wozniacki, the 11th seed at the Foro Italico, decided she could not carry on after Collins won the first set 7-6 (7-5).

The 2018 Australian Open winner called for the physio three times before shaking hands when Collins took the opening set.

Dane Wozniacki was beaten by Madison Keys in her first final of the year in Charleston last month.

The 28-year-old revealed she had struggled with a viral illness for almost two months after withdrawing from the Dubai Tennis Championships in February, having been diagnosed with rheumatoid arthritis last year.

Danielle Collins has a message for you!#ibi19pic.twitter.com/ZtrKakAJtl