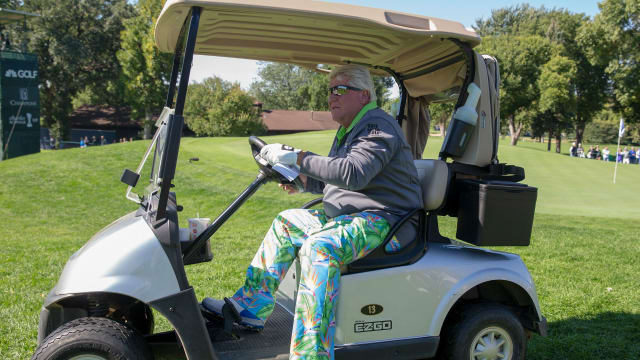 Tiger Woods made light of the news John Daly will be allowed to use a golf cart at the PGA Championship – noting he has won a major in worse condition.

Daly, 53, successfully applied to be able to use a cart this week at Bethpage Black as he continues to suffer with arthritis in his knee following a number of surgeries.

"My knee is screwed," he said, as quoted by the New York Post . "I had the meniscus cut out. I have osteoarthritis so bad… I can walk up a hill. I just can't walk down one."

The decision has not been met with a mixed response and Masters champion Woods took it as an opportunity to recall his 2008 U.S. Open victory, where he incredibly prevailed in an 18-hole play-off against Rocco Mediate despite being hindered by knee ligament damage and a fractured leg.

"As far as J.D. taking a cart, well, I walked with a broken leg, so…" he said at a news conference on Tuesday.

"I walked with a broken leg."

Friendly reminder @TigerWoods is as tough as they come. #PGAChamp pic.twitter.com/01wyfhQWEa

Six-time major winner Nick Faldo was among the dissenting voices around 1000-1 shot Daly.

"Personally I think walking is a physical part of being a professional golfer," he said, as quoted by the Post. "The physical element of walking and being able to do that. I'd keep it as simple as that."