Woods happy to be part of winning narrative once again 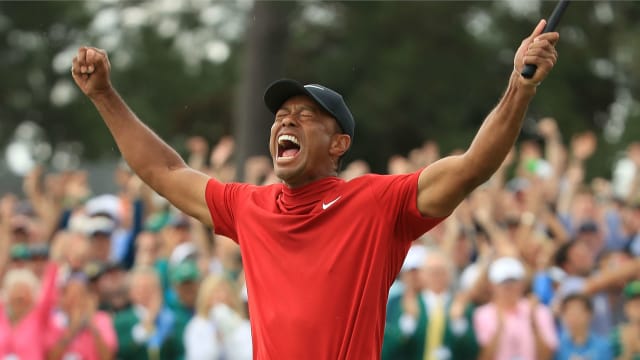 Tiger Woods is delighted to be "part of the narrative" again as he looks to make it back-to-back major wins at the US PGA Championship.

Woods ended an 11-year wait for his 15th victory in one of golf's signature events when he prevailed at an emotionally charged Augusta in April.

He is the bookmakers' favourite to win the PGA Championship this week at Bethpage Black in Long Island and is thriving under renewed expectations at this stage of his career.

"It's great to be part of the narrative. My narrative spans 20 years now, just over 20 years," Woods said at a news conference on Tuesday.

"And if you look at most of the players, of the players that have had the most success on tour, you're not measured by, like an NFL football player where you get in the hall of fame after nine years. If you play out here only nine years you haven't really done that well. You're measured in decades.

"Arnold Palmer played in 50 straight Masters, you know. It's just done differently and because of the nature of the sport we're able to hang around a lot longer and still be relevant.

"The neat thing about this championship here is when Jack [Nicklaus] played in his last PGA Championship in 2000, I played with him. He said he played with Gene Sarazen in his final PGA and so the fact that golf can span nearly 60, 70 years in playing careers, that's what makes it so special."

Start your day with @TigerWoods as we go live from Bethpage Black! #PGAChamphttps://t.co/bg4uxWuzV5

Alongside Woods' 15 major triumphs, he has 81 PGA Tour victories. Only Nicklaus in majors (18) and Sam Snead in wins (82) have more.

Only once has he followed Masters glory by winning the subsequent major, although that feat was achieved at Bethpage when he triumphed in the 2002 U.S. Open.

The 43-year-old has not played a competitive round since his Masters win, something he attributed to needing to take a mental break.

"I wanted to play a couple of weeks ago, but I just wasn't quite mentally ready to do it," he said. "But physically I've been feeling really good.

"Training sessions have been good, I've been doing a lot of practicing of late, not in sweaters, so this is a little bit different. I'm excited to get out there on the golf course."

Woods will tee off on Thursday at 8:24am ET (1:24pm BST) alongside the defending PGA champion Brooks Koepka and reigning Open champion Francesco Molinari.