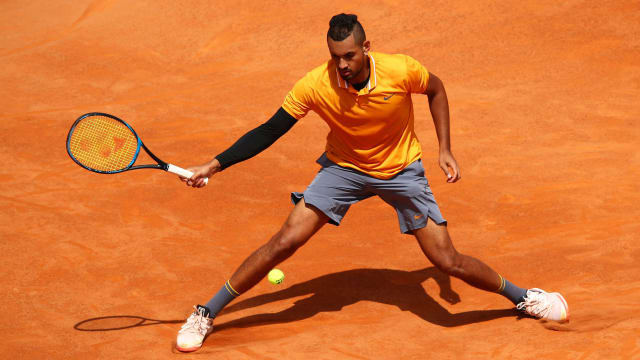 Nick Kyrgios started his first-round match against Daniil Medvedev with one of several underarm serves and went through his full repertoire of shots en route to the second round in Rome.

Kyrgios was beaten by Jan-Lennard Struff in the first round of his opening game of the clay-court season at the Madrid Open last week.

The controversial Australian was unpredictable even by his own standards as he responded by claiming the scalp of 12th seed Medvedev in the Internazionali d'Italia.

Kyrgios set the tone by getting the match under way with an underarm serve and on one occasion he faked to deliver another before tossing the ball up to start a point in more traditional fashion on Tuesday.

The innovative world number 36 treated the crowd to tweeners, exquisite lobs, drop shots and even turned his back as his Russian opponent was about to unleash a forehand.

Kyrgios also launched a ball over the stands as he pulled off a 6-3 3-6 6-3 win, providing the most alternative of highlight reels.

A lil bit of everything today @NickKyrgios#IBI19pic.twitter.com/zjlBTMnJ5h

Williams says any team sale would be to secure F1 future