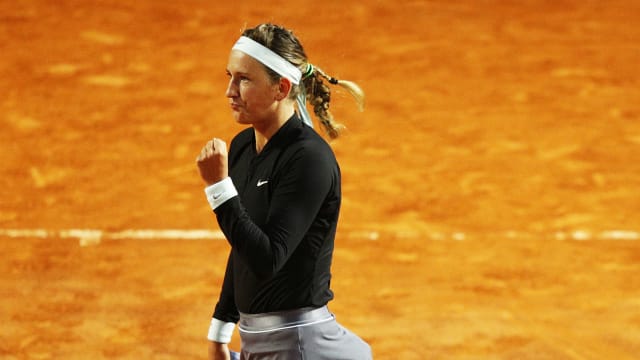 The withdrawal of Serena Williams was accompanied by two high-profile retirements from the women's singles draw at the Internazionali d'Italia on Tuesday, before defending champion Elina Svitolina was eliminated in stunning fashion by Victoria Azarenka.

Either side of Williams pulling out of her scheduled second-round match with sister Venus due to an ongoing left knee problem, Caroline Wozniacki and Jelena Ostapenko were each forced to call an early halt to their respective contests in Rome.

Svitolina - seeking a third title in a row in Rome - then blew a 4-1 lead in the third set of a rain-hit duel with Azarenka, as the latter saved a match point and completed an unlikely comeback to triumph 4-6 6-1 7-5.

Wozniacki retired from her clash with Danielle Collins after losing the first set in a tie-break, a calf injury the issue on this occasion after back trouble prevented her from completing a match against Alize Cornet in Madrid last week.

Ostapenko, meanwhile, was a game away from defeat against Mihaela Buzarnescu when she stopped the tie, the Latvian later citing a fever as the reason.

Karolina Pliskova and Ashleigh Barty both progressed to the last 16, but fellow seeds Aryna Sabalenka and Anastasija Sevastova were beaten by Cornet and Belinda Bencic respectively.

AZARENKA COMES BACK FROM THE BRINK TO OUST REIGNING CHAMPION

Svitolina is still working her way back from a knee injury and a lack of match sharpness perhaps contributed to her painful defeat at the hands of Azarenka.

Despite being blown away in the second set - which was repeatedly interrupted by rain - after taking the first, the Ukrainian looked likely to progress when she claimed three successive breaks of serve at the start of the decider, either side of being broken once herself.

However, despite enjoying a fourth success on the Azarenka serve, Svitolina was sensationally beaten as her rival reeled off five games in a row from 5-2 down, saving a match point in the first of those.

After reaching the quarter-finals of the Australian Open in January, Williams has now failed to finish three tournaments in succession.

A viral illness ended her participation in the Indian Wells Open, while an ongoing issue with her left knee has derailed her campaigns in Miami and Rome.

In a statement on Tuesday, the 23-time grand slam singles champion said she looked forward "to seeing you all at the French Open", but her preparation for Roland Garros has been anything but ideal.

#Serena , due to a knee injury, had to withdraw from the tournament. Venus #Williams gains access to the next round. #ibi19 pic.twitter.com/fxHARjzSqD

It is never a great look to retire when you are trailing 6-2 5-4, but Ostapenko - the 2017 French Open champion - took to social media to defend her premature stoppage against Buzarnescu.

"It really sucks when you have to retire from a match at one of your favourite tournaments," she wrote in an Instagram story.

"Unfortunately, I felt really bad today out there on court and had a fever [of] 38.1 [degrees], so I couldn't continue the match.

"I feel really sad about it, but I will do everything possible to recover as quick as I can."