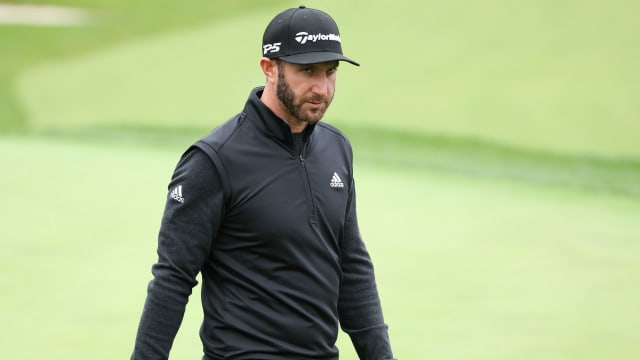 World number one Dustin Johnson feels ready to challenge for top honours at the US PGA Championship.

The year's second major gets underway in Farmingdale, New York on Thursday, with Johnson looking to add to his 2016 U.S. Open triumph.

Johnson has not played in a tournament since the RBC Heritage at the end of April – it was only his 11th PGA Tour event of the season.

So far, the American star has seven top-10 finishes, which includes a tie for second place at the Masters.

Usually by the time Johnson is preparing for the PGA Championship, he has finished a long stretch of events like the Open Championship and the WGC-Bridgestone Invitational.

But, with the PGA Championship moving from August to May at Bethpage Black, it could very well favour Johnson.

How far does @DJohnsonPGA hit each club in his bag? #LiveUnderParpic.twitter.com/XUn1w9AI0O

"I like the date. I like the change. I think it's good," Johnson told reporters on Tuesday. "It's definitely different for me, but obviously mentally I'm coming in here very fresh and focused and ready to go.

"Is the game probably as sharp as it is after four weeks of big tournaments? Probably not. But I feel like I'm swinging really well. I've felt like I've been swinging well all year."

In majors, Johnson has made the cut in six of his past seven tournaments. He was close to breaking his major drought at Augusta National after winning the 2016 U.S. Open, but came up a stroke shy of Tiger Woods.

However, this course could be the one that sees Johnson claim his second major title.

At Bethpage Black, Johnson's best finishes came at The Northern Trust – formerly known as The Barclays – where he tied for 18th in 2016 and tied for third in 2012.

"[I'm] a little frustrated sometimes just because I've had quite a few chances [to win a major] and I've felt like a few of them I really didn't do anything — I played well," Johnson said. "But that's just how it is. It's hard to win majors. If it was easy, a lot of guys would have a lot more than they do.