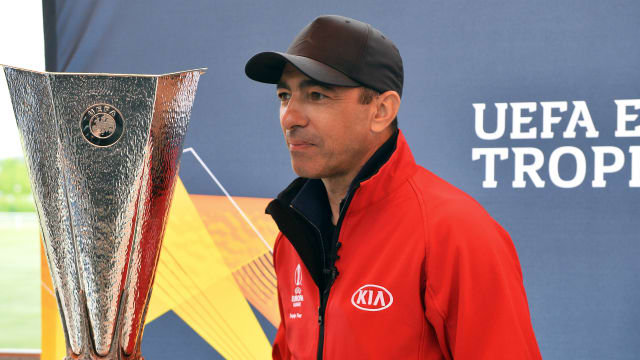 Paul Pogba needed a year to recover from winning the 2018 World Cup but will bounce back for Manchester United next season, according to Youri Djorkaeff.

He was involved in a confrontation with some United fans on Sunday as players walked around the pitch following their final-day 2-0 home loss to relegated Cardiff City.

Despite the criticism, Pogba ended 2018-19 with 13 Premier League goals and a further nine assists – more than any of his United team-mates managed – and earned a place in the PFA Team of the Year.

And Djorkaeff, who was part of the France team that won the 1998 World Cup on home soil, thinks Pogba's up-and-down season was to be expected.

Speaking courtesy of the UEFA Europa League Trophy Tour – Driven by Kia, he told Omnisport. "When you win a World Cup, the following year is usually difficult for everyone, not only Pogba.

"For any world champion, the impact is such that you need a year [to get over it]. Next year, Pogba should reach an even better level.

"He will be able to show his qualities better than he could with Mourinho in Manchester."

22 - Paul Pogba has been involved in 22 Premier League goals this season (13 goals, 9 assists), his best ever return in a single top-flight campaign. Worthy. #PFAawards#TOTYpic.twitter.com/70hp92Z24Y

Pogba has been linked with a move away from United, with Real Madrid reportedly his preferred destination if he leaves.

Joining the LaLiga giants would allow Pogba to team up with compatriot Zinedine Zidane, a former international team-mate of Djorkaeff.

Zidane's March return to Madrid has been underwhelming, his side suffering two defeats in their past three league matches as their season peters out.

Djorkaeff feels the challenge facing Zidane will be to shape the Madrid squad in his image, with Gareth Bale seemingly among those who are surplus to requirements after being left out of their two most recent matchday squads.

"We were expecting him everywhere. He was linked to many clubs," Djorkaeff said of Zidane. "What's interesting is the way he came back.

"Real Madrid are at the end of a cycle, got knocked out in the last 16 of the Champions League and the following week the president [Florentino Perez] decided to change the head coach for someone who knows them well.

"That's a strong message that the Real Madrid president sent to the fans and the socios [members]. It says: 'We'll get the best back, even if he previously left, we'll do whatever it takes to have him back and start the conquest again'.

"Don't forget that they won three Champions Leagues in a row. It was a first. I think that the main change for Zidane is that he's going to build a team.

"The first time, he joined an incredible team, with great players. He's going to build a new team now that I hope will start a new cycle."