Raptors will have to be better against Bucks - Nurse 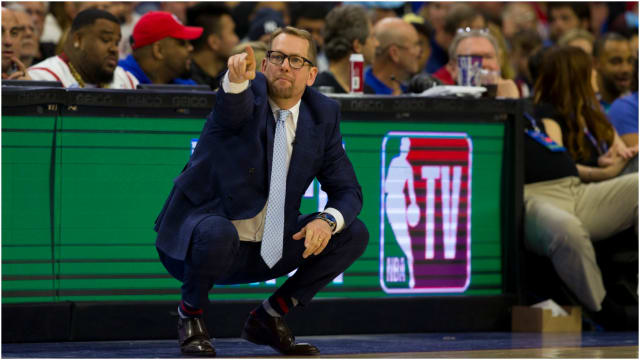 Nick Nurse believes the Toronto Raptors will have to improve if they are to defeat the Milwaukee Bucks in the Eastern Conference Finals.

The Raptors went seven games with the Philadelphia 76ers but ended on a high, winning 92-90 on Sunday thanks to Kawhi Leonard's landmark buzzer-beater.

That victory booked a date with the Bucks, the top seed in the NBA, boasting MVP candidate Giannis Antetokounmpo and able to rest up since knocking out the Boston Celtics in five games.

Coach Nurse acknowledged the scale of Toronto's task, believing they must alter their game, recover quickly and perform better in order to prevail.

"It's a totally different style than we've just been through in our last two series," Nurse told a news conference.

"These were set-play teams, pretty methodical on offense, going to come down and look at things, run stuff for certain guys.

"It's not to say Milwaukee doesn't do that, too, but they'd much rather spread the floor, give it to a guy to put their head down and take it to the rim, then put it in the rim.

"If you send help, they're going to fire it out and shoot a ton of threes.

The Raptors head to Milwaukee for Game 1 on Wednesday.