Premier League 2018-19: The best Opta numbers of a thrilling season 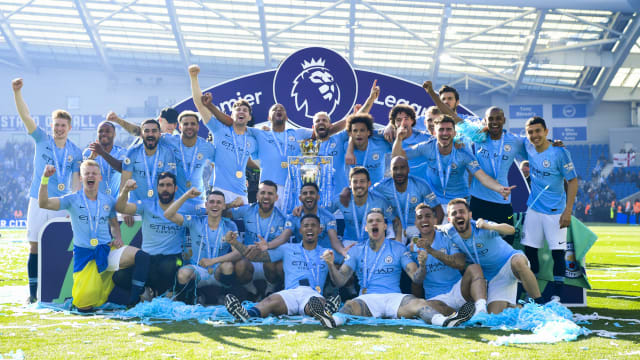 The Premier League is over again for another season with fans having to wait until August 10 to get their fix of top-flight action.

Manchester City can reflect on becoming the first team to retain the title in a decade, having held off the strong challenge from Liverpool.

Jurgen Klopp's side recorded the third-highest points total in Premier League history but it was still not enough to dethrone City.

Omnisport takes a look at some of the best Opta numbers from another gripping season of Premier League football.

May 13... quite an important day in #mancity folklore!

44 - Ilkay Gundogan's goal for City in November's Manchester derby completed a stunning 44-pass move - more than any goal in the Premier League this term.

00:07 - At the other end of the scale, Southampton striker Shane Long broke the record for the fastest Premier League goal when he netted against Watford after seven seconds last month. It was one of five goals scored in the opening minute, with City's Sergio Aguero hitting two of them.

0 - Relegated Fulham were the only side to finish the season without claiming a single point from matches against the 'Big Six' of City, Manchester United, Liverpool, Chelsea, Arsenal and Tottenham.

22 - With 22 points from their 10 matches against fellow teams from the capital (seven wins, one draw), Chelsea won the all-London mini-league featuring the Blues, as well as Spurs, Arsenal, West Ham, Crystal Palace and Fulham, who failed to get any points in those games either.

31 - Eden Hazard scored 16 Premier League goals and provided 15 further assists, earning the Playmaker of the Year award and topping the table for goal involvements. He was involved in 49.2 per cent of league goals scored by Chelsea this term, indicating why they are so keen to keep him amid reported strong interest from Real Madrid.

9 - Not only did Sadio Mane and Mohamed Salah share the Golden Boot, they each opened the scoring in nine Premier League matches, more than anyone else in the top flight during the 2018-19 campaign.

19 - Pierre-Emerick Aubameyang also got a Golden Boot for his 22 Arsenal goals. They won a total of 19 points for Unai Emery's men, six more than any other Premier League player this term.

-0.44 - David de Gea's poor form is mirrored in the Opta numbers, which show his goals prevented figure at just -0.44, only the 18th best in the league. By contrast, West Ham's Lukasz Fabianski topped the table on 12.69 goals prevented despite actually letting in 54, excluding own goals.

86 - Watford midfielder Etienne Capoue intercepted the ball more times than any other player this season. Cardiff City defenders Sol Bamba and Bruno Ecuele Manga both managed 81 interceptions despite the Bluebirds suffering relegation from the Premier League.

3,119 - Perhaps unsurprisingly, Chelsea's Jorginho played more passes than anyone else in the Premier League, with Liverpool's Virgil van Dijk the only other man to reach 3,000. Jorginho's accuracy was also a commendable 89.23 per cent in his first season in English football.

12 - Manchester United were awarded more penalties than any other Premier League side, but only converted nine of them. Palace scored from 10 of the 11 spot-kicks they were awarded in 2018-19.

29 - Ralph Hasenhuttl steered Southampton to safety, but there is one obvious area of improvement for next season. The Saints lost a potential 29 points from winning positions, while Leicester City only let three points slip. Liverpool's 16 points won from losing positions was the league's highest.

15.63 - The best shot conversion record in the Premier League belonged to Arsenal, who scored with 15.63 per cent of their efforts. Bournemouth and Burnley were also in the top five, behind Liverpool and City.

71 - The 2018-19 campaign saw only 71 draws, the lowest in any season in the history of the competition, while 34 per cent of matches ended in an away win, which also set a Premier League record.