Leonard: I was going to leave it all out there 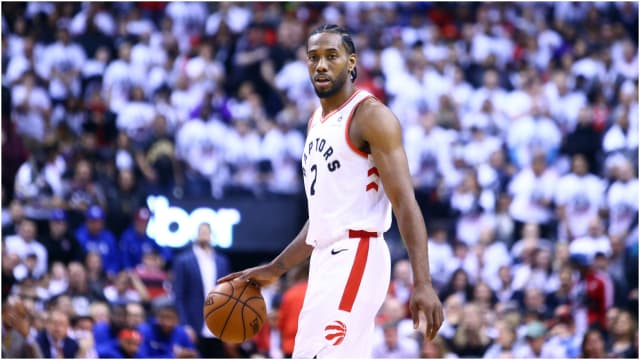 Kawhi Leonard said he planned to "leave it all out on the floor" for the Toronto Raptors in Game 7, desperate to ensure this was not the end of his season.

Raptors star Leonard produced a stunning buzzer-beater in the second-round series decider against the Philadelphia 76ers on Sunday, stealing a sensational 92-90 win after the ball bounced four times on the rim before dropping.

Leonard ended on 41 points with 16-of-39 from the field, insisting afterwards that missed shots were not his concern as he looked to do everything to inspire his team.

"I knew it was Game 7 and I didn't want to leave any shots in my mind," Leonard told a news conference. "I just wanted to go out and leave it all on the floor.

"This could have been my last game for the season - I would have had to wait four months, five months to put another shot up in a game.

"I was going to leave it all out on the floor tonight, not worried about makes or misses, just trying to will us to a win and get to my spots."

It was the first Game 7 buzzer-beater in NBA history and Leonard was delighted to be able to "feel that moment".

"It was great. That's something I've never experienced before, Game 7, game-winning shot," he said. "It was a blessing to be able to get to that point, make that shot and feel that moment. It's something I can look back on in my career.

"Probably the last time you've seen me scream was when we won [the 2014 title with the San Antonio Spurs].

"Whenever there is a moment I haven't really experienced, I try to show some emotion and let it just come out. Tonight was one of those nights, where I'd never been in that situation before.

"It's the first time somebody hit a game-winner in Game 7, so I just showed emotion and it was a great feeling. I'm just happy that we can move onto the next round."

The Raptors begin their Eastern Conference Finals series against the Milwaukee Bucks on Wednesday.