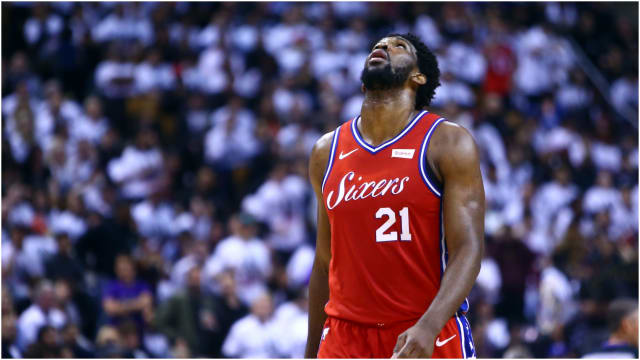 Joel Embiid struggled to explain his playoff heartbreak after the Philadelphia 76ers were beaten by Kawhi Leonard's sensational Game 7 buzzer-beater.

The Sixers took Leonard and the Toronto Raptors the distance in their Eastern Conference semi-final series but fell to a 92-90 defeat in the decider on the road, with the crucial last-second shot bouncing four times on the rim before dropping in.

Embiid appeared to be crying after the game and he found it difficult to later expand on his emotions.

"Game 7, losing a game that way, last shot, after a hard-fought game, I felt like we had a chance," he told a news conference.

"A lot of things go through your mind. It sucks. I can't explain it, it just sucks."

He added on Raptors star Leonard: "He's a great player, obviously. He did his thing. You've got to give him credit. He made some tough shots the whole series. They leaned on him heavily."

Jimmy Butler, Embiid's team-mate, similarly could only praise Leonard for his role in an incredible series.

"He hit a tough one. You tip your hat to that," he said. "He's an incredible player - you know it, we all know it. There isn't too much more you can say about it."

Butler is now a free agent but was not interested in igniting speculation so soon after a painful loss.

He said: "I'm not worried about that right now right after losing. I don't want to talk about anything else except for basketball."