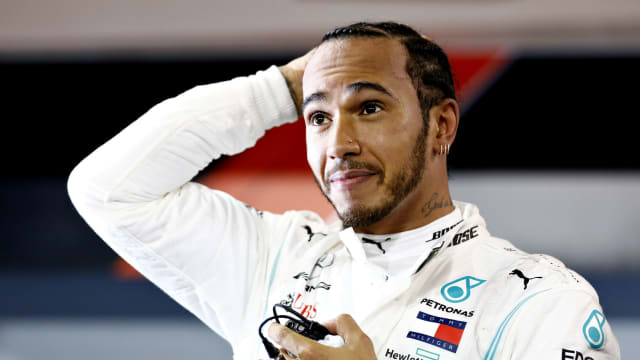 Lewis Hamilton moved to the top of the drivers' championship as Mercedes dominated again in Barcelona, but some of the talk in paddock was less promising for Silver Arrows fans.

Team principal Toto Wolff suggested ahead of the Spanish Grand Prix that he would expect Hamilton to be interested in making a switch to rivals Ferrari at the end of next year.

The Briton's Mercedes contract - reportedly worth £40million per year - expires in 2020 and Wolff even claimed to have discussed a potential move with the five-time Formula One champion.

Hamilton, who sent shockwaves through the grid by swapping McLaren for Mercedes ahead of the 2013 season, was less certain after beating team-mate Valtteri Bottas on Sunday, stating he did not remember the conversation but acknowledging his Ferrari fandom.

It is a saga that is likely to drag on for the next 18 months and could end up ranking among some of the biggest moves in the history of F1.

Scuderia star Lauda announced his intention to leave the team at the end of the 1977 season. However, he did not make it that far. Having already secured the drivers' championship, he quit with two races remaining due to Ferrari's decision to run his replacement Gilles Villeneuve in a third car.

Lauda agreed a big-money move to Brabham but could not recreate his previous success, though he did get his hands back on the title with McLaren in 1984.

11 May 1975 - Niki Lauda, winner of the Monaco Grand Prix, receives the trophy from Grace Kelly #redseasonpic.twitter.com/P8APASVsgE

If Hamilton were to link up with Ferrari, he could end up being team-mates with long-time rival Sebastian Vettel. Similarly, the 1988 season saw McLaren bring Senna in alongside Alain Prost to boast two of the best drivers on the grid.

Senna, who had received Prost's blessing, won three titles in in his first four years with the team in what proved to be a hugely successful McLaren career.

Prost and Senna did not last long together – something that could be seen as a warning for Ferrari. They won a championship each, before the competitive nature of the two appeared to become too much and Prost agreed a move to Ferrari.

The Frenchman was unable to replicate his former glories in Scuderia red, though. Prost, who had been ditched by Renault earlier in his career, was fired after two years for criticising the team's car.

There would certainly be parallels between Hamilton and Schumacher were the Briton to join Ferrari. Schumacher had won back-to-back titles with Benetton and Ferrari were without a drivers' championship since 1979 when the German signed for the Scuderia from 1996.

Schumacher endured a slow start with Ferrari, but it was ultimately a match made in heaven. After winning his first championship with the team in 2000, he went on to claim five in a row and take his overall haul to a record-breaking seven.

Prost, Senna and Schumacher share the podium for the only time, in Spain #SpanishGP#F1pic.twitter.com/nyoeqYDTTp

Two-time champions Alonso spent the 2007 season with McLaren and finished third, behind rookie team-mate Hamilton in the drivers' standings, before returning to Renault and enduring a pair of difficult campaigns.

A long-mooted move to Ferrari was finally sealed for 2010 and the Spaniard was once again a contender. However, he finished as a runner-up three more times and never claimed a third title.