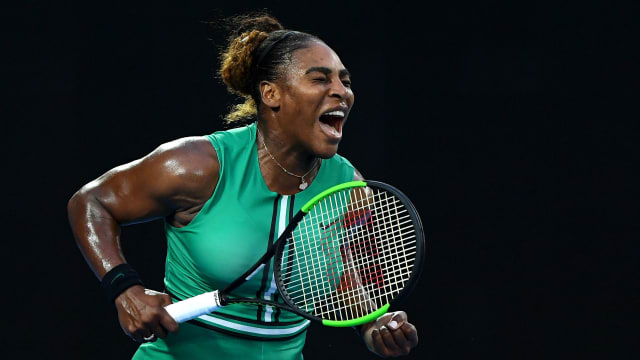 Serena Williams marked her return to action with an explosive display and a 6-4 6-2 victory over Rebecca Peterson at the Internazionali d'Italia on Monday.

Williams had not played on the WTA Tour since beating Peterson at the Miami Open in March, before bowing out of that tournament with a left knee injury.

But the 23-time grand slam champion was back with a rare appearance on the clay - her first in Rome since claiming a fourth title in 2016 - and looked to come through unscathed as she prepares for the French Open.

Williams served superbly, with the exception of one early break, and she gradually started to convert break points with some regularity, teeing up a potential second-round meeting with sister Venus, who faces Elise Mertens in her own opener.

Williams could not capitalise on a break-point opportunity in the opening game but then produced a devastating hold to love, keeping the pressure on Peterson.

Two further chances came and went and then a tame forehand into the net at 15-40 saw Williams broken, although that deficit was wiped out immediately with a stunning return.

The American kept forging openings and Peterson thrashed wide to put Williams in front for the first time at the end of the seventh game, before two comfortable holds sealed the set.

The second set had been a punishing experience for Williams in the pair's previous meeting, yet she was quickly back on the front foot this time, her power and pinpoint placement proving Peterson's undoing.

A double-break was secured with a glorious effort into the far corner of the court as Williams backpedalled away from the net, with one final battling hold sealing an impressive win in 74 minutes.