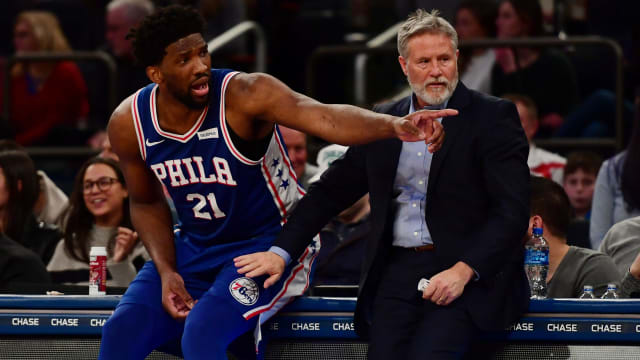 The 76ers suffered a gut-wrenching 92-90 Game 7 loss to the Toronto Raptors in the Eastern Conference semi-finals on Sunday.

There have been reports that Brown would no longer be in Philadelphia if the 76ers lost the Eastern Conference semi-finals, but All-Star Embiid passionately defended the 58-year-old on Monday — less than 24 hours after Kawhi Leonard hit a buzz-beater to end the team's season.

"I was off social media. ... I heard about all those rumours and stuff," Embiid told the media. "and I just thought it was bull****.

"He's done a fantastic job. He's been there through everything."

“I still have a lot to give... I feel like a lot of people haven’t seen what I can really do.” pic.twitter.com/LRKgT0kaKt

The New York Times noted that while there is uncertainty regarding free agents like Jimmy Butler, Tobias Harris and JJ Redick, for Brown to remain with the 76ers he would need "an NBA Finals berth to keep his job."

The report added Brown "has little chance of surviving a second-round exit."

Butler, who is facing pending free agency, had worked under Brown for just six months following his arrival from the Minnesota Timberwolves, but said the sixth-year head coach has "a huge heart."

“[Coach Brown] has a huge heart… he’s always thinking of how he can make everybody great.” pic.twitter.com/YbjPjFofFA

"He's a great dude and he works incredibly hard, so you gotta respect that about him." Butler said. "He's always of how he can make everybody great, which is hard to do whenever you have a roster like we have/had. I think he's going to be here for a long time."

After four consecutive seasons of missing the playoffs, Brown led the 76ers to the conference semi-finals the past two seasons following last year's defeat to the Boston Celtics.