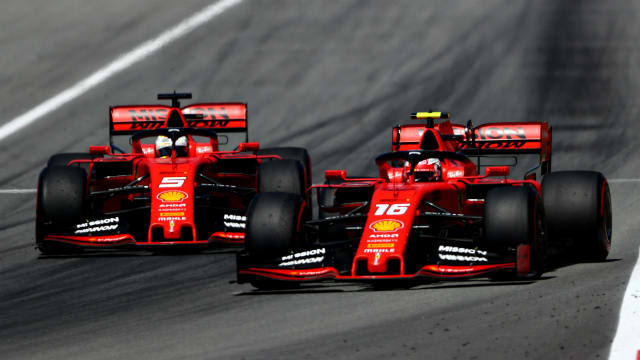 Sebastian Vettel felt his Spanish Grand Prix was compromised by an unsuccessful manoeuvre on the first lap, while he admitted to being unaware Ferrari changed Charles Leclerc's strategy.

Four-time Formula One champion Vettel looked to attack down the outside of Mercedes duo Lewis Hamilton and Valtteri Bottas into turn one but ran wide and ended up slipping behind Max Verstappen into fourth.

While Hamilton cruised to victory ahead of Bottas as the Silver Arrows sealed a record-tying fifth successive one-two, Ferrari twice deployed team orders as Vettel and Leclerc vied for fourth.

After being told to let Leclerc pass due to a flat spot sustained on his attempted overtake at the start, Vettel was later allowed through when he showed greater pace than his team-mate, who had been put on hard tyres in what appeared to be a switch to a one-stop strategy.

"We talked about it quite a lot on the radio. I was struggling to see stuff and I was also slowed down, so it compromised my first stint," Vettel said of the early tyre damage he sustained.

"After that I think the pace was fine, but from there it was difficult to really come back. The safety car gave us a bit of a chance but we were the same pace as Max so it was impossible to pass."

On the team orders, he said: "We talked about it internally. Inside the car we try to do our own race. In the beginning it was clear Charles was faster and once he was putting more and more pressure on I was happy to let him go.

"[In the] second stint I wasn't aware we were on different strategies for a long time but once it was clear I was let go and I was obviously a lot faster.

"I tried to put pressure on Max but with the safety car in the end it didn't really matter."

Seb immediately takes to the airwaves, asking for a tyre change...#F1#SpanishGPpic.twitter.com/qIxukvxETT

And Vettel gets past on Lap 37 and heads off in pursuit of Max Verstappen in P3#F1#SpanishGPpic.twitter.com/9NtydAAOvi

Leclerc saw no issues with the directions given from the garage during the race, despite a safety car being deployed after Lando Norris and Lance Stroll collided, scuppering his chances of success on a one-stop strategy.

"On this race there was absolutely no problems for me," he said.

"Obviously in the first stint I was quicker but it's always difficult when a driver behind tells you he is quicker. We always want to be ahead.

"After that they let me pass and I could make my race and after that we swapped again when I was struggling."