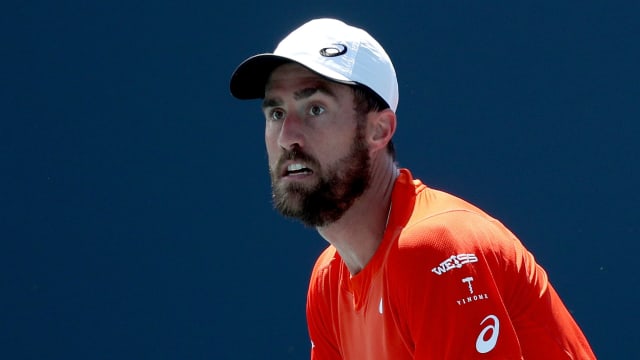 Teenager Jannik Sinner saved match point as he came from behind to claim the first ATP Masters 1000 victory of his career on home soil against Steve Johnson at the Internazionali d'Italia.

The 17-year-old wildcard won for the second time on the ATP Tour despite losing the first set in just 22 minutes, outlasting Johnson 1-6 6-1 7-5 to set up a meeting with Madrid Open runner-up Stefanos Tsitsipas in round two.

Sinner, ranked 262nd in the world, dug in to hold while trailing 5-2 in the third set and reeled off the next four games in succession to seal a notable win in his fledgling career in Rome.

His fellow Italian Matteo Berrettini beat Lucas Pouille 6-2 6-4 to advance to a match against fourth seed and 2018 runner-up Alexander Zverev, but there was no joy for compatriot Andreas Seppi. The world number 67 went down to Roberto Bautista Agut 6-1 3-6 6-1.

Fourteenth seed Nikoloz Basilashvili got past Marton Fucsovics 6-1 7-6 (7-2) in the only match unaffected by rain, while Philipp Kohlschreiber triumphed 6-2 3-6 6-3 against Gilles Simon.

NO SURPRISE FOR SINNER

His career on the ATP Tour may still be in its infancy, but Sinner was confident he had what was required to overcome Johnson.

"Steve Johnson is strong, but I knew I could beat him. We watched some Johnson footage to get a feel for his game," said Sinner.

"Of course, I'm surprised. It's not a normal thing for me. But our goal is not just to win a few matches but to go further in a few years."

BERRETTINI GETS A SHOT AT REVENGE

Hometown favourite Berrettini was beaten by Zverev in round two in 2018 and is wary of underestimating the German, who has a 13-8 record this season and has failed to win successive matches since February.

"He is not going through a great period, but we must not forget that he is coming from two exceptional seasons. And he's only a year younger than me," said Berrettini.

"At the beginning of this year I had some ups and downs, I lost a few very hard matches, but I was convinced I prepared adequality. I was looking forward to playing on clay."