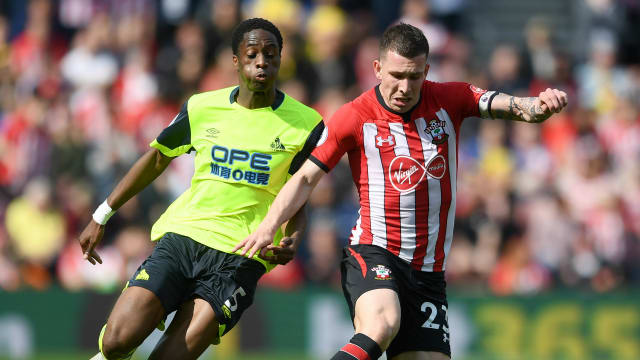 Alex Pritchard punished an Angus Gunn error to give already-relegated Huddersfield Town the farewell prize of a 1-1 Premier League draw against Southampton at St Mary's Stadium.

On the day Manchester City sealed the title, their former goalkeeping prospect had a moment to forget as his poor touch granted midfielder Pritchard the simplest of finishes 10 minutes after half-time.

The goal cancelled out Nathan Redmond's first-half opener and secured Jan Siewert just his fifth point in charge of the Terriers, who concluded their second Premier League campaign at the foot of the table.

Southampton's inability to make their superiority count will only strengthen Ralph Hasenhuttl's resolve to reinforce a side that ended the season on a five-match winless streak.

Siewert dropped outgoing goalkeeper Jonas Lossl in favour of Joel Coleman and the 23-year-old's first real act was to gift away possession in a dangerous area.

Shane Long failed to take advantage, shooting over the crossbar on the turn, but Redmond offered no such mercy in the 41st minute.

The winger cut across the top of the box and curled a brilliant finish beyond Coleman's despairing dive.

James Ward-Prowse tried to mimic his team-mate moments after the interval, but Huddersfield's deputy stopper did well to tip a fine attempt onto the bar.

Southampton's course for victory seemed set until Pritchard pinched the ball off a dozing Gunn and restored parity in the 55th minute.

The mistake took the air out of the home crowd and, though they continued to do the bulk of the pressing, a second failed to transpire for the hosts.

What does it mean? Work to do for both bosses

On the evidence of a match that lacked attacking spark and was not free of avoidable errors, the two men on the touchline share common ground.

In particular, both sides could do with fresh faces in key positions.

Hasenhuttl has urged attacker Redmond to take up a more influential role moving forward and the one-cap England international responded in front of his own fans.

His goal was indicative of the talent admired by the Saints boss and four key passes presented the picture of a player fitting comfortably to the coach's instructions.

Fraser Forster came in for a rare start in last weekend's 3-0 loss at West Ham before the recall of Gunn, the usual number one, for this final outing.

Having dislodged Alex McCarthy earlier this term, and with his spot not entirely assured, the former Manchester City shot-stopper will be disappointed to have been solely responsible for Huddersfield's equaliser.

Evolution rather than revolution might be the method for Hasenhuttl, who has flagged his intention to "make a few changes" in the pursuit of improvement with Southampton.

His counterpart has a greater task ahead. Siewert, having overseen 12 defeats in 15 matches, knows recruitment and the early implementation of ideas will be crucial if Huddersfield are to challenge at the top end of the Championship.