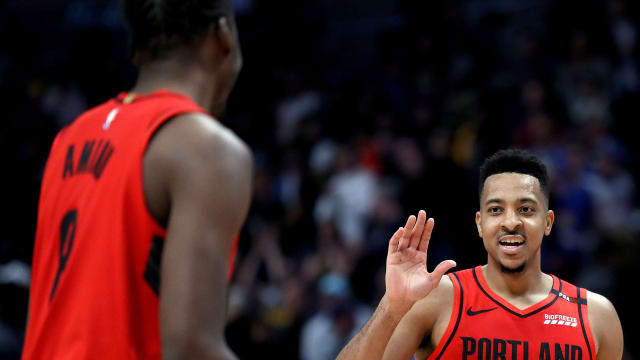 Kawhi Leonard delivered to see the Toronto Raptors to a thrilling win over the Philadelphia 76ers in the NBA playoffs on Sunday.

Leonard had 41 points, eight rebounds and a ridiculous game-winning jump shot as the Raptors edged the 76ers 92-90 in Game 7 of the Eastern Conference semi-finals.

He dominated the 76ers in Game 7 on Sunday and hit possibly the most improbable jump shot in NBA history.

With the game tied at 90 with 4.2 seconds left, the Raptors got one last shot and Leonard put it up from the corner.

It bounced once, twice, three times and rolled in to give Toronto a 92-90 win.

In Denver, it was not Damian Lillard's night.

The Trail Blazers' best player was three of 17 from the floor in Game 7 and Portland needed more.

Fortunately, they had it in the form of CJ McCollum, who dropped 37 points to lead the team to a 100-96 win over the Nuggets and a berth in the Western Conference finals against the Golden State Warriors.

McCollum finished his night 17-of-29 from the floor with nine rebounds and iced the game late with a beautiful mid-range jumper in the face of Torrey Craig.

Evan Turner scored 14 points, but more importantly was eight of nine from the free-throw line, including several big ones down the stretch for Portland.

Jamal Murray had a good line with 17 points, six rebounds and five assists, but four-of-18 shooting and 0 for four from beyond the arc is not what Denver needed in an elimination game.

Of all the people to posterise an opponent, Meyers Leonard was probably low on the list of players expected to do it.

The Warriors made a statement by getting a Game 6 win over the Houston Rockets without Kevin Durant. Game 1 against Portland is on Tuesday.