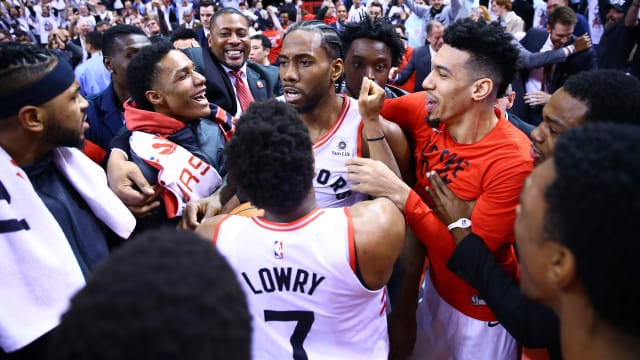 Kawhi Leonard felt he got the "shooter's bounce" for his incredible game-winner for the Toronto Raptors against the Philadelphia 76ers.

Leonard's buzzer-beater saw the Raptors edge to a 92-90 win in Game 7 of the Eastern Conference semi-finals on Sunday.

While he starred with 41 points, Leonard got some luck for the game-winner, which bounced on the rim four times before dropping in.

"I felt great. I was just [saying] that we work on that every day. I was driving base line," he told ESPN.

"I missed the last one short so I just wanted to put it up in the air and got the shooter's bounce."

Leonard added: "Just a lot of hard work, just went into my shot, I just shot it as high as I could.

"I got some loft on it and it made the ball bounce soft and it ended up going in. I was disappointed missing that free throw [earlier] so I really wanted to make that shot."

The Raptors will face the Bucks in the Eastern Conference finals, with Game 1 in Milwaukee on Wednesday.