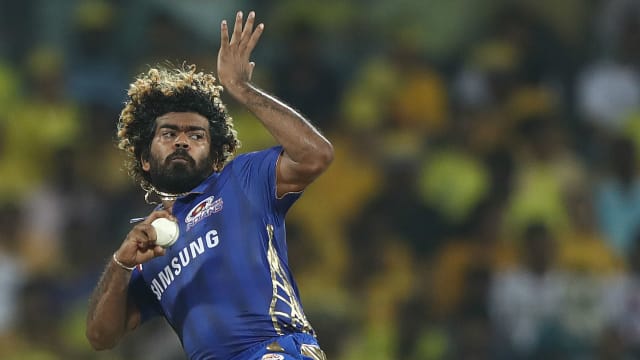 Chennai needed only nine runs off the last over to retain their crown and become the first team to win the IPL four times, but Malinga held his nerve to deny MS Dhoni's side.

CSK required four to win off two balls after Shane Watson was run out for 80 having hesitated going for a second as the tension built in the final over in Hyderabad on Sunday.

Shardul Thakur struck the penultimate delivery for two, but was trapped leg before by the ice-cool Malinga off the final ball to spark huge celebrations from the Indians and their supporters.

There was nobody more relieved than Indians teenager Rahul Chahar, who dropped Watson on 42 and 55.

Watson was named man of the match after smashing an unbeaten century in last year's final against Sunrisers Hyderabad and looked set to see CSK home again, but fellow veteran Malinga was the hero on this occasion.

Chennai have now lost three out of four deciders they have played against Mumbai, who were worthy champions after being top at the end of the regular season.

Unprecedented scenes from Hyderabad as @mipaltan became #VIVOIPL champs for the 4th time!

Lasith Malinga showing his true class in the last over #MIvCSKpic.twitter.com/ZzVK0KHx5O

Tahir needed two scalps to be the leading wicket-taker in the tournament and the evergreen spinner grasped his chance to surpass South Africa team-mate Kagiso Rabada.

The 40-year-old tweaker struck with his second ball when Suryakumar Yadav played on and he secured the purple cap by removing Ishan Kishan, reducing Mumbai to 101-5 in the 15th over.

Quinton de Kock blasted four sixes in a quickfire 29 but the wicketkeeper-batsman and fellow opener Rohit Sharma were removed in quick succession by Thakur and the excellent Deepak Chahar respectively.

POLLARD PACKS A PUNCH - AND A WARNING

A flurry of wickets put the brakes on the Indians, but the powerful Pollard flexed his muscles with a swashbuckling knock.

There was no shortage of entertainment in the final over, with Pollard getting a ticking off from the umpires after moving outside the off stump as Bravo ran in to bowl, ending up off the track seemingly in protest at the previous ball not being deemed to be a wide.

DHONI PAYS FOR RUNNING ON A MISFIELD

Faf du Plessis and Watson hit 50 apiece against Delhi Capitals on Friday to set the holders on their way to another final, but the Proteas skipper fell for 26 after setting about Krunal Pandya in the fourth over.

Suresh Raina and Ambati Rayudu fell cheaply before what appeared to be a huge moment in the match when Dhoni was run out going for an overthrow.

There was a long wait as the third umpire deliberated prior to ruling that the former India captain was marginally short of his ground, leaving Mumbai with work to do on 82-4 in the 13th.

MALINGA ON THE MONEY AFTER WATSON FALLS SHORT

Watson should have followed for 42 in the next over, but Rahul Chahar failed to hold on to a sharp chance off his own bowling and the 19-year-old was unable to cling on again when the opener mistimed a hook.

The youngster had taken 1-14 from four excellent overs, but looked certain to pay for letting Watson off the hook when the former Australia all-rounder creamed Pandya for three consecutive sixes in the 18th over.

Watson was unable to see it out, though, failing to get back for what should have been two runs to end a brutal 59-ball knock and a slower ball yorker from Malinga trapped Thakur in front to regain the title in the most dramatic fashion.