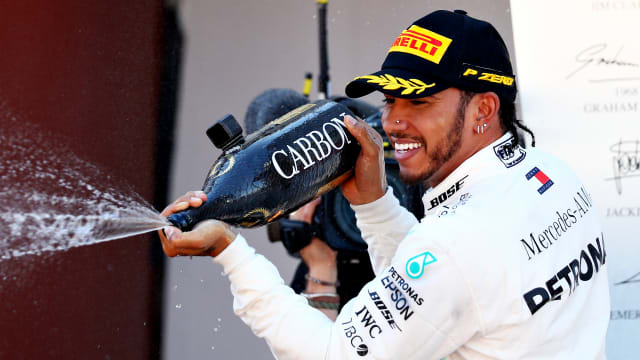 Lewis Hamilton insists he wants to help Mercedes become the most successful Formula One team in history after Toto Wolff suggested he may be tempted to join Ferrari.

Prior to Hamilton's win at the Spanish Grand Prix on Sunday, Mercedes team boss Wolff claimed the Briton – who is under contract until 2020 - could be wooed to join Ferrari before the end of his career.

The world champion refused to completely rule out the prospect after beating team-mate Valtteri Bottas to claim his third victory of the season, yet stressed breaking records with his current team was his priority.

Mercedes' fifth consecutive one-two in Barcelona equalled an F1 record ahead of the next race in Monaco.

"I don't really remember what he's referring to," Hamilton said of Wolff's revelation about the pair discussing the prospect of a Ferrari move.

"I think when you're in negotiations you always have to drop in the Ferrari name. You come out better!

"No, naturally in negotiations - Toto's a very intelligent man so we have great negotiations and great conversations and naturally I've been with Mercedes since I was 13, so it's very difficult to see myself anywhere else.

"I have never made it a secret that I've been a Ferrari fan, particularly Ferrari cars, and that's no secret. Do I plan on going elsewhere? I haven't made any plans for my future. At the moment, I'm just enjoying driving with this team.

"I'm enjoying continuously growing with this team and it's incredible what we're achieving together, what we have achieved in these six or seven years.

"I plan on working with this team to help it become the most successful team of all time. That's my current goal and my sole focus."

P1 We did it!! What an incredible feeling this is...Thank you all for your love and positivity. This is yet more history made for our team with 5 one-twos! So proud! #nevergiveup#TeamLH@MercedesAMGF1pic.twitter.com/iE8HUuSMyX

Hamilton's victory, where he also claimed a fastest-lap bonus point, saw him pass pole-sitter Bottas at the opening turn having said he was too friendly to his team-mate last time out in Baku.

"I just have to put it down to this incredible team," he said of his win. "Honestly, I wasn't thinking about the last race. It is a new race. I think I was really trying to redeem myself after a poor performance [in qualifying on Saturday].

"Just back into a strong battle that we've had for years now. It was respectful and balanced – as we always are. The team has spoken of it, and Valtteri and I have spoken of it, and I think we have the best pairing that any team has, especially with the balance that we have in terms of how respectful we are.

"A lot of the drivers don't do that, they don't have that respect between themselves. I was obviously well and truly on the inside [at turn one]."