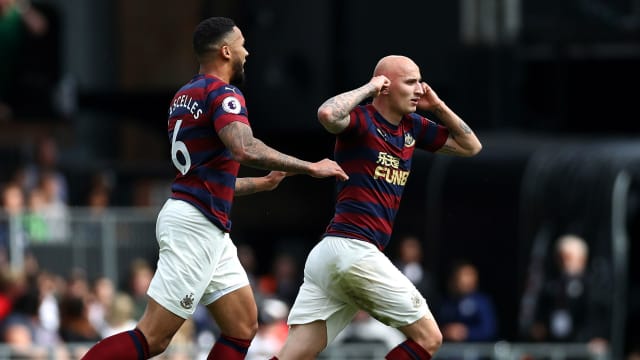 Scott Parker's first game in permanent game in charge of Fulham ended in a disappointing 4-0 Premier League defeat to Newcastle United on Sunday.

The Cottagers' immediate return to the Championship was confirmed on April 2 but Parker had restored pride in recent weeks, overseeing a run of three wins in four games before the Magpies' visit to Craven Cottage.

The woeful defending that has characterised their season was on full display again, though, as Jonjo Shelvey and Ayoze Perez scored within the space of just over two first-half minutes to put the visitors ahead before Fabian Schar netted a third in the second half and Salomon Rondon added late gloss to a comprehensive scoreline.

Parker will now turn his attention to masterminding a swift return to the Premier League, while Newcastle manager Benitez will continue his discussions with owner Mike Ashley – who was watching on in west London – over a new contract.

Goals from Jonjo Shelvey, Ayoze Pérez, Fabian Schär and Salomón Rondón have given the Magpies a resounding win in their last game of the season.

Things got worse for the hosts just 124 seconds later when Rico fumbled Christian Atsu's low effort into the path of Perez, who prodded home from close range for his sixth goal in his last five Premier League games.

Aleksandar Mitrovic headed narrowly wide from a corner midway through the first half as Fulham belatedly woke from their slumber, but they were unable to reduce the deficit before the interval.

Fulham improved at the start of the second period but they were undone by more generous defending when Schar easily out-jumped Alfie Mawson to head home Ritchie's corner in the 61st minute.

And the hosts' misery was compounded in the 90th minute when Rondon powered through and slotted in from an acute angle after Rico had saved his initial effort.

What does it mean? Parker needs to shore up leaky defence

After conceding a whopping 81 goals this season it is clear where Parker needs to focus his attention ahead of a season in the Championship. The former England midfielder has certainly overseen an improvement during his short time at the helm but this defeat lays bare the scale of the task facing him. Newcastle, meanwhile, end the season with three wins in five games and will hope for Benitez to remain to help them contend for a top-half finish next season.

The 25-year-old has enjoyed his best goalscoring season for the Magpies since his arrival in 2014 and he again showed why he is reportedly interesting some of the league's bigger clubs with an instinctive poacher's finish.

In what should be his last game for the club before his loan switch from Sevilla comes to an end, the goalkeeper endured a game to forget. Not for the first time this season, he made a mess of what should have been a routine save to gift Perez the visitors' second.

Parker will hope that Fulham's strong end to the season will carry over to the start of their Championship campaign as he plots an immediate return to the top flight. Newcastle, meanwhile, need to tie Benitez down to a new contract if they hope to plan effectively for next season.