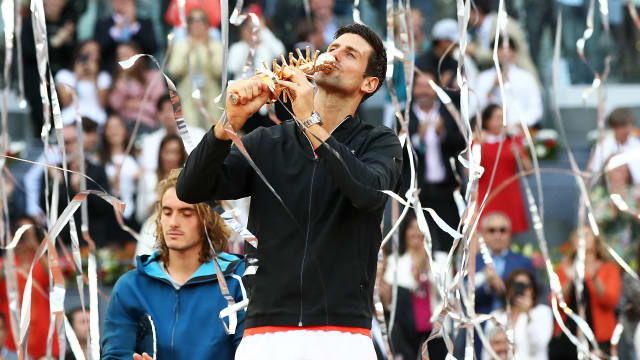 Novak Djokovic feels he regained his momentum at the Madrid Open and is aiming to continue building on that at the Internazionali d'Italia next week.

World number one Djokovic clinched a record-equalling 33rd ATP Masters 1000 crown by defeating Stefanos Tsitsipas 6-3 6-4 on Manolo Santana on Sunday, his first title on clay since completing the career Grand Slam at the 2016 French Open.

The Serbian had struggled for form since winning the Australian Open in January, losing three of his subsequent eight matches before arriving in Spain.

However, he overcame the in-form Dominic Thiem in the Madrid semi-finals and sealed the title for the third time in his career, making him the favourite to triumph at Roland Garros next month.

"I'm very pleased. I was saying yesterday after the semi-final win it was a very, very important win for me, for my confidence. I wasn't playing my best tennis after Australia so I was looking to regain momentum this week," Djokovic said in an on-court interview.

"I started off well, I didn't drop a set in the entire tournament so I'm very pleased. I played some of my best tennis here.

"[Tsitsipas is] very talented, he beat Rafa [Rafael Nadal] and I think they finished the match around midnight. He had a very late night, I could see he wasn't as dynamic in the movements as he was last night and that's probably due to the long match, but he's had a terrific week.

"It's a big win for me and in this tournament and I'm really looking forward to continue the streak in Rome."

Djokovic paid tribute to his brother Marko, who has acted as coach in the absence of Marian Vajda.

"I'd like to thank my team, my brother Marko, who has the role of the coach this tournament," said the 31-year-old.

"I'm really glad we managed to win the first tournament together as player and coach. You've been great, I love you."