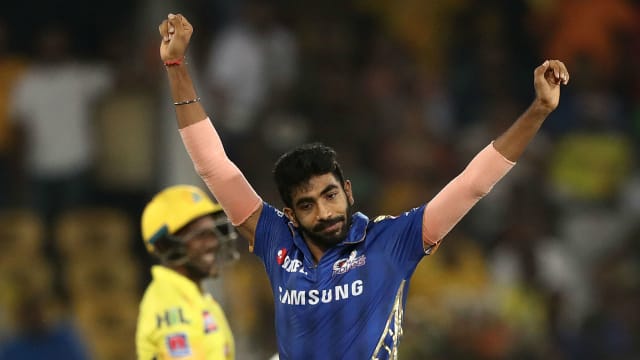 CSK looked set to retain a trophy they have won three times when they needed nine off the last over to reach their victory target of 150 with Shane Watson at the crease.

MS Dhoni's side required four off two deliveries after Watson - man of the match in last year's final having smashed an unbeaten century - was run out for 80 off 59 balls when coming back for a second after he had been dropped twice by Rahul Chahar.

Lasith Malinga held his nerve by trapping Shardul Thakur leg before with a slower-ball yorker off the last delivery to seal victory two years after Mumbai were also crowned champions with a last-ball win.

Man of the match Bumrah, who removed Dwayne Bravo from a penultimate over that cost only nine runs and claimed 2-14, says self-belief was key to Mumbai coming out on top.

In a game that went down to the wire, @mipaltan won the @IPL final against @ChennaiIPL. #IPL2019Final#MIvCSKhttps://t.co/XqiGx3nLEk

"I'm really happy, we always believed in our team," said the India paceman.

"Whenever we are in tough situations we back each other, stay close and have confidence in each and every individual. On a given day anybody can win us the game. It's a great feeling and we are really happy."

Kieron Pollard top scored with 41 not out off only 25 balls to get the Indians up to 149-8 and the all-rounder knew his knock could be decisive.

"Playing in so many finals, you know the most runs you get on the board, pressure is going to be on them. My aim was to try and stay in until the end. Then Bumrah and Malinga bowled brilliantly, taking the game away from CSK."